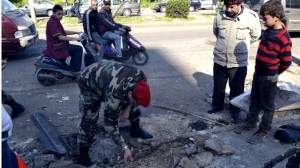 Eleven people died in the northern Lebanese city of Tripoli on Friday in fighting between supporters and opponents of Syrian President Bashar al-Assad which also sparked clashes with the Lebanese army, security and medical sources said.

Seven people were shot dead on Friday, including gunmen and civilians, one of them an elderly man. Most were shot by snipers but some gunmen were killed in clashes with the army, the sources said.

Four people who were wounded in earlier clashes died, including two gunmen who were hit in overnight clashes between fighters from the Sunni district of Bab al-Tabbaneh and the Alawite neighborhood of Jebel Mohsen, the sources said.

It was one of the deadliest days in the Mediterranean port city, which has seen frequent outbreaks of violence since the start of the conflict in neighboring Syria three years ago. Twenty-seven people have been killed in the last week, the sources said.

Tripoli, like much of Lebanon, is divided along sectarian lines and is only 50 km (30 miles) from the Syrian border. Its majority Sunni Muslims, who back the Syrian rebels, often clash with the minority from Assad’s Alawite sect.

Lebanon’s population is deeply divided over the Syrian war. Shi’ite militant and political movement Hezbollah and its allies support Assad while many of the country’s Sunnis back the revolt.

Tripoli’s Sunnis and Alawites have clashed sporadically for decades but the Syrian conflict has worsened tensions, with each side accusing the other of using the city as a base for sending fighters and weapons in and out of Syria.

Lebanon’s parliament gave a newly formed cabinet a vote of confidence on Thursday, ending almost a year of political deadlock.

But the country suffers regular car bombings and rocket attacks, as well as incursions by the Syrian army in pursuit of rebels who move across the border.