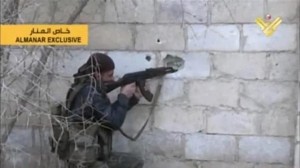 Syria’s army has been making advances against the opposition in recent days by exploiting divisions among rebel fighters and by relying on elite fighters from Lebanon’s Hezbollah, analysts say.

The Lebanese group is believed to have played a key role in the army’s recapture of Yabrud, which lies close to the Lebanese border.

The fall of the town and subsequent operations nearby to seal off the border will sever rebel supply lines that ran across it.

On Sunday, the regime seized the rebel bastion of Yabrud, near the Lebanese border, dealing a powerfully symbolic and strategic blow.

And on Thursday, its forces recaptured the famed Krak des Chevaliers Crusader castle in central Homs province, which had been seized by rebels shortly after the uprising began in March 2011.

The advances have been aided by a new strategy developed in the wake of truces negotiated between the government and opposition in areas around Damascus, an army official said.

“The army has learned the lessons of the truces around Damascus,” where exhausted fighters have laid down their arms.

“It completely encircles an area and allows fighters to leave if they turn over their arms and pledge not to resume fighting,” he added.

“That creates serious divisions between the local rebels and the hardliners, particularly the jihadists, and then the army attacks.”

The description accords with accounts given by fighters and activists in both Yabrud, where jihadists accused moderate rebels of abandoning the town, and the Krak des Chevaliers battle.

“The fort area was under army siege for more than two years,” an activist with ties to rebel commanders in Homs said.

“To get food in, the fighters had to pay bribes at the military checkpoints.”

He said the rebels were left exhausted, and were further demoralized after troops took the nearby town of Al-Zara.

The situation became even more difficult, and there was an agreement where the regime agreed to open a safe passage for the fighters to leave to Lebanon so they could withdraw, and that’s what happened,” he said.

Charles Lister, a visiting fellow at the Brookings Doha Centre, said that had become a familiar scenario in the conflict, now in its fourth year.

“Free Syrian Army-linked groups have consistently demonstrated a willingness to pragmatically withdraw when the defense of a certain locality has become futile,” he said.

Jihadist fighters, including the Al-Qaeda affiliated Al-Nusra Front, have been less willing to do so in some cases, leading to “recriminations,” he added.

Not a turning point

The divisions have been exacerbated by infighting in rebel-held areas in the north, where opposition groups have turned against the jihadist Islamic State of Iraq and the Levant.

And fighters say new weapons pledged by outside backers and the opposition National Coalition never arrived at the Yabrud front.

But he noted that Lebanon’s Shiite Hezbollah movement and the National Defence Forces, a local pro-regime militia, had help bolster the army.

“Since the recapture of Qusayr, the regime has gone on the offensive,” he said, referring to a Homs provincial town the army took from the rebels last June.

“The National Defense Forces are protecting the territory that the government has taken, which has freed up the soldiers to launch new offensives, strengthened by Hezbollah,” he said.

The town’s capture came after a lengthy regime operation in the surrounding Qalamun region last year, during which it captured a string of nearby towns and began shelling Yabrud.

Thomas Pierret, a Syria specialist at the University of Edinburgh, also emphasised Hezbollah’s role in the capture of Yabrud and broader Qalamun.

“The regime’s success in Qalamun was due to Hezbollah’s strong involvement because of the area’s proximity to Lebanon,” he said.

But he cautioned against assuming the regime’s recent advances marked a turning point in the conflict, noting rebel success elsewhere.

“I think that we need to do away with these generalisations, between these military developments are highly local,” he said.

“The regime advances in some areas; it is pushed back in others.”