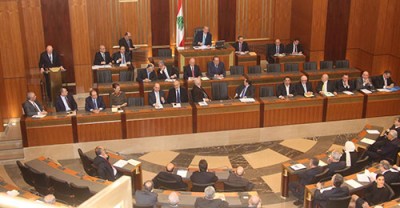 The speaker of the Lebanese Parliament Nabih Berri held a two day session starting Wednesday  aimed at discussing the policy statement of Prime Minister Tammam Salam’s new cabinet, which took nearly ten months to formulate and  was  therefore certain to win the vote of confidence.

Out of the 101 MPs present at the session, 96 of them granted their vote of confidence to the new cabinet, while three Lebanese Forces MPs as well as Nicolas Fattoush gave it a vote of no-confidence as Al-Jamaa al-Islamiya MP Imad al-Hout abstained from voting.

Here are some highlights on the discussions:

Future Movement bloc MP Kazem al-Khair said he will grant the cabinet his vote of confidence.

“The concept of true national interest necessitates rising above narrow interests,” he said during the parliament session discussing the ministerial statement.

Hezbollah MP Hussein Moussawi: “We want the state and we have rejected and still rejected all suggestions we endorse that a statelet.”

“Because we want the state we have carried the standard of the resistance, and not monopolized it.”

Lebanese Forces bloc MP Tony Abou Khater withheld his vote of confidence , saying that resistance should not be monopolized by one party.

“The resistance must not be kidnapped by one party. It is the responsibility of the entire homeland.” He said

Future MP Samir al-Jisr used the opportunity to address the violence in Tripoli, saying, “At every political turning point, Tripoli is used as a bartering card.”

Syrian Social Nationalist Party (SSNP) MP Marwan Fares says “the first condition for success of the cabinet is the will to confront terrorism.”

Phalange party MP Sami Gemayel asked Speaker Nabih Berri to delay his speech so he could be the last MP to speak.

Future MP Amin Wehbeh said that “we were able, despite all conditions, to produce a ministerial statement considered to be an achievement by some.”

Marada Movement MP Estefan Douaihy ceded his vote of confidence on the cabinet to Speaker Nabih Berri and Marada Movement leader Suleiman Franjieh, saying that both of them had the approval to vote on his behalf as they please.

“The ministerial statement offers no opportunity for fundamental or positive change,” he said

Progressive Socialist Party MP Henri al-Helou announced he would give the cabinet his vote of confidence, saying, “The most important achievement of the cabinet is that it is everyone’s cabinet.”

MP Robert Ghanem announced he will give his vote of confidence to the cabinet, voicing hope that it will succeed in its tasks. He was the last to speak in the first part of the session

[18:00] Parliament resumes its discussion on the cabinet’s ministerial statement.

[16:16] Lebanese Forces bloc MP Fadi Karam was the first to speak after the parliament resumed its session and like the other LF MPs he withheld his vote of confidence to the cabinet.

“We have great faith in many of our friends and allies who are part of the cabinet to make up for the wrongful fundamentals on which the cabinet was formed,” he said

Phalange party MP Elie Marouni confirmed his party’s approval of Lebanon’s new cabinet Wednesday, stressing that the party had chosen to confront issues of contention from within the government.

“ The Phalange party defends the state until death and we have decided to confront [issues of contention] from within the government and the parliament,” Marouni said

Jamaa Islamiya MP Imad al-Hout said he would abstain from granting the vote of confidence for Lebanon’s new cabinet, citing the fears of his party that differences between the government’s parties will obstruct the cabinet’s work.

“I am not refusing [to grant] a vote of confidence for the cabinet, but wisdom dictates that we aim to minimize our losses as much as possible,” Hout said

Progressive Socialist Party MP Alaeddine Terro granted the cabinet his voice of confidence, and called on it to prepare for the presidential election.

In his speech during the parliament session, Terro decried the fuss over the ministerial statement.

“Cabinets come and go, and ministerial statements are written. However, not all that is written is implemented,” he said.

Future Movement bloc MP Ammar Houri granted the cabinet his vote of confidence, saying that it was the best that can be achieved under the current circumstances.

“The formation of the cabinet and the drafting of a ministerial statement relieved the tension in Lebanon,” Houri said

Change and Reform bloc MP Ibrahim Kanaan granted the cabinet his confidence vote and called for holding the presidential election on time.

“We want three things from the cabinet: to provide tranquility and security, to kick off oil drilling in order to promote the economy in Lebanon, and to provide the appropriate conditions to hold the presidential election,” Kanaan said

Lebanese Forces bloc MP Strida Geagea, wife of LF leader Samir Geagea declared that her party will not give the newly formed cabinet of Tammam Salam the vote of confidence but stressed that the LF lawmakers would not obstruct the government’s work.

The parliament resumed the discussion on Thursday.

Phalange party MP Fadi al-Haber said A new President must be elected. We are participating in the government for the national interest.

Future Movement bloc MP Khaled al-Daher criticized “wrong practices” by some officers in the Lebanese army, prompting the MPs of the Change and Reform bloc to object to his statement.

Daher granted the cabinet his vote of confidence.

Hezbollah bloc MP Walid Succarieh responds to al-Daher: “The Lebanese army is intent on the security of Tripoli and on all Lebanese areas. I ask the defense minister to reveal all the facts so that everyone knows who is putting Tripoli in danger.”

Future Movement bloc MP Ahmad Fatfat granted the cabinet his vote of confidence and called on it to abide by its ministerial statement.

Fatfat also said that the parliament would be solely responsible for any possible presidential vacancy .

Prime Minister Tammam Salam said that the cabinet must be given a chance and that the Lebanese army alone should not be held responsible for the lack of security in the country.

“The army is not alone responsible for the suffering. It shares responsibility with the security forces, and we are following up on what [these institutions] are doing,” Salam said.

“In many cases, the lack of political cover for the army is the problem.”

Hezbollah bloc MP Hassan Fadlallah granted the cabinet his vote of confidence, but said that the Lebanese state was flawed.

“The flaws have marred the state since day 1 of its its creation, even before Hezbollah was born,” Fadlallah said

“The resistance emerged when the state became absent and abandoned its responsibilities.”

“There wouldn’t have been a state had there not been the resistance. Maybe Sharon would have reached Baabda.” He said

Fadlallah also called on all citizens who want to liberate the land to join Hezbollah.

Lebanese Forces MP George Adwan withheld his vote of confidence , in line with all LF MPs

“Trying to cover up divisions within the country with a verbal statement or flowery expressions will not lead to the desired solution.” He said and added

“We don’t want Hezbollah’s arms to be part of the equation of the Lebanese state. We only want it to be used to fight Israel.”

Phalange party bloc MP Sami Gemayel granted the cabinet his vote of confidence, but said it was “a cabinet of contradictions.”

He also said that the cabinet’s ministerial statement contained many of these contradictions as well.

Gemayel also called on the cabinet to respect the law and the constitution.

The parliament resumed the session at 5 pm

Zahle MP Nicolas Fattoush was the first to speak and said his city was left out of this government and consequently deprived the participation of the most important Christian city in the East.

He said The majority of decisions taken in Lebanon are based on foreign orders and said he cannot grant his vote of confidence to a cabinet that “does not have a clear identity.”

Former PM and Future MP Fouad Siniora said the cabinet will not be in power for a long time,” which should serve as an opportunity for us to cooperate to make its short term a success.”

He added: ” The cabinet should restore the role of the state and its institutions. Only then can we succeed in ending the crisis we are experiencing.”

” We agreed to join this cabinet in spite of our deep differences because we believe in Lebanon’s democracy and the Taef Accord.” He said.

“The state regained its sovereignty thanks to the resistance.”

He added: “The resistance will remain as long as Israel exits and occupies Lebanese land.”

“We thank the MPs for their valuable suggestions and we stress to them that this cabinet shares their national concerns. We promise that we will put the legitimate demands on the track of implementation.”

“The government will not promise anything that it will not be able to achieve. Let no one expect miracles and we will do everything in our capacity to address the problems.”

Excerpts of the ministerial statement:

The cabinet does not promise to accomplish all the aspirations of the citizens.

The cabinet aims at forming a political safety net in order to protect the country.

The cabinet stresses the unity, the power and the sole authority of the state in all matters related to the general policy of the country.

The cabinet will continue reinforcing the capabilities of the Lebanese army and security forces in order to enable them to carry out their duties to protect the border and imposing security.

We will expedite the process of arming the army and equip it through all the financing sources, especially through the generous Saudi donation.

The main challenge facing the cabinet is to hold the presidential election on time.

The cabinet pledges to seek a new electoral law for the parliamentary elections, and to work on a draft law for administrative decentralization.

The cabinet will follow up on the decisions taken by previous national dialogue sessions.

The cabinet will work on resolving the economic situation and will take all possible measures to activate the main economic sectors, especially tourism.

The cabinet will follow up on the wage correction issue.

The cabinet will give special attention to the oil file and pledges to expedite the procedures related to the permits of oil drilling.

The cabinet will fill vacancies in public sector jobs.

The cabinet will follow up on the Special Tribunal for Lebanon until it uncovers the truth behind the assassination of former Prime Minister Rafiq Hariri.

The cabinet will double its efforts on all levels to follow up on the disappearance of Imam Moussa Sadr in Libya.

The cabinet will apply clear measures to deal with the Syrian refugees issue.

The cabinet confirms the state’s obligation to liberate the Shebaa farms, the Kfarshouba hills and the Lebanese part of the Ghajar village with all available means. It acknowledges the right of Lebanese citizens to the resistance against the Israeli occupation and to deter its assaults and retrieve the occupied land.

The cabinet commits to the policy of disassociation in order to protect the country with the best ways against the repercussions of the crises in nearby countries.