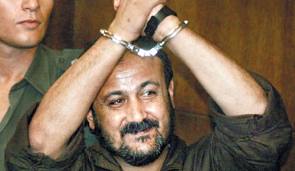 According to several top officials, the Palestinians are seeking the freedom of Marwan Barghouti, who is serving multiple life sentences for his alleged role in killings of Israelis, as part of any plan to extend negotiations with Israel beyond an April deadline.

A release of Barghouti, a popular figure among Palestinians, could inject new life into the troubled peace process, boost embattled Palestinian President Mahmoud Abbas, and even provide the Palestinians with a plausible successor to their 78-year-old leader.

But Israel seems unlikely to approve the request, setting the stage for a possible breakdown in the talks.

Under heavy U.S. pressure, Israel and the Palestinians restarted negotiations last July, setting a nine-month target for wrapping up a comprehensive peace deal establishing a Palestinian state and ending a century of conflict. After realizing this was unrealistic, U.S. Secretary of State John Kerry scaled back his ambitions and said he would aim for a “framework” peace deal by the April deadline.

With even that more modest goal in question, the sides are now searching for a formula that will allow the talks to continue.

The Palestinians have been skeptical about the chances of success, distrusting Israeli Prime Minister Benjamin Netanyahu. A prolonging of the talks means continuing shelving of their previous plans to press for recognition, even without a peace deal, with various international bodies.

The Palestinians have two demands for an extension: a freeze in Israeli settlement construction in the West Bank and east Jerusalem and the release of the most senior prisoners held by Israel, first and foremost Barghouti, two Palestinian officials told The Associated Press — senior official Nabil Shaath and Prisoner Affairs Minister Issa Qaraqi.

Israel was already forced to release dozens of prisoners convicted of deadly violence to make the current round of talks possible, but Barghouti remains jailed.

With Israel not expected to halt settlement construction, the Palestinians say they will drive a tough bargain on the prisoner issue. Palestinian officials and Barghouti’s family said Abbas raised the issue of Barghouti’s release in his White House meeting this week with President Barack Obama.

Barghouti’s wife, Fadwa, said Abbas is “exerting his efforts to release Marwan and he is very serious about it.”

Israeli officials said the matter has not yet come in the talks. They spoke on condition of anonymity because they were not authorized to discuss the peace efforts with the Palestinians.

Saadat heads a faction that killed an Israeli Cabinet minister in 2001 and is serving a 30-year sentence for allegedly participating in attacks. Shobaki, a former top Palestinian official, is the alleged mastermind of an attempt to smuggle a large shipment of weapons to the Palestinians on a ship that was intercepted by Israeli naval commandos in 2002.

But no prisoner is more prized by the Palestinians than Barghouti, who was a rising star in the dominant Fatah party before he was captured by Israeli troops in 2002. Israel says Barghouti, 54, was a leader of the violent uprising in the West Bank early last decade. He is serving five life terms for alleged involvement in the deaths of four Israelis and a Greek monk.

The Palestinians say Barghouti is a politician who had no direct involvement in any of the killings.

Barghouti’s release could be critical for Abbas. The Palestinian leader has seen his popularity plummet due to the lack of progress in peace talks. Winning Barghouti’s freedom would be a huge moral victory for him.

And at almost 79, Abbas has recently acknowledged he cannot serve forever. Yet he has never designated a successor and is facing a rising challenge by an exiled former aide, Mohammed Dahlan. Barghouti is perhaps the only member of Fatah’s next generation of leaders with the gravitas to confront that challenge.

Fadwa Barghouti said her husband remains intimately involved in Palestinian affairs from his cell in an isolated bloc of the Hadarim prison in central Israel.

She said he shares a cell with two other men and is allowed to go outdoors into a courtyard twice a day — one hour each time — for exercise and a walk. She said he starts his day with exercise and then reads four Israeli newspapers. In addition to his native Arabic, Barghouti speaks Hebrew and English.

As a member of Fatah’s leadership, Barghouti is briefed on the negotiations through his wife, who is in close contact with the Palestinian leadership and visits him twice a month.

“He was hoping that the U.S. Secretary of State John Kerry would succeed in striking a deal based on the Israeli commitment to end the occupation on the 1967 borders,” she said.

Barghouti, like other Palestinian leaders, wants to establish an independent state in all of the territories captured by Israel in the 1967 Mideast war: the West Bank, east Jerusalem and Gaza Strip, she said. Several past Israeli offers, by more moderate governments than Netanyahu’s, seemed to come close, but ultimately fell short.

The fate of the roughly 5,000 prisoners held by Israel is deeply emotional in Palestinian society. Virtually every Palestinian has a friend or relative who has served time in Israel, and the prisoners are revered as freedom fighters.

But the issue is equally emotional for Israelis, who see prisoners like Barghouti as terrorists.

At the outset of talks last July, Israel agreed to release 104 long-serving prisoners in four stages. But the fourth and final stage, scheduled later this month, is suddenly in jeopardy.

The previous releases, including dozens of men who were convicted in deadly attacks, have been accompanied by jubilant celebrations by Palestinians and attended by Abbas himself, angering many in Israel. On Tuesday, Israel’s chief peace negotiator said the final release was not guaranteed unless there was progress in the talks.

For that reason, the release of Barghouti could become a contentious issue in the coming weeks. Israeli officials have rejected repeated attempts to include him in past prisoner releases.

Still, Israel could be tempted. During the peace talks of the 1990s, Barghouti was generally liked by the Israelis, had many friends among them, and was considered a moderate interlocutor. With many Israelis concerned that Abbas will be followed by more radical nationalists or Islamists, a Barghouti ascension, despite his supposed actions during the uprising, might not seem like the worst option.

Without a significant gesture, the Palestinians could soon walk away from the negotiating table.

Shaath gave a glimpse of what could lie ahead, saying the Palestinians would soon resume a campaign for U.N. recognition if Israel does not carry out the final scheduled prisoner release. Israel bitterly opposes the U.N. campaign, since the Palestinians have said they will use their enhanced international status to press for anti-Israel action. The Palestinians halted the campaign in exchange for Israel’s pledge to free prisoners.

“We committed to not applying to the U.N. agencies and Israel committed to release 104 … prisoners in four batches,” he said. “That was the deal. If Israel breaches it, we will too.”