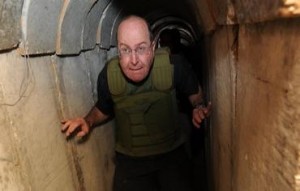 Israel’s defense minister has accused the United States of projecting weakness internationally and said Israel could not rely on its main ally to take the lead in confronting Iran over its nuclear program.

Moshe Yaalon, whose remarks were reported in the Haaretz daily on Tuesday, caused friction with the United States only two months ago when he described Secretary of State John Kerry’s quest for Israeli-Palestinian peace as messianic and obsessive.

“We had thought it would be the United States that would lead the campaign against Iran,” said Yaalon, who pointed to the Ukraine crisis as an example of Washington “showing weakness”.

It was unclear from Yaalon’s reported remarks where he believed the United States, which on Monday imposed sanctions on two top aides to President Vladimir Putin and nine other people linked to Russia’s Crimean incursion, had gone wrong on Ukraine.

Iran and six world powers will try to make headway on the nuclear dispute in talks that started in Vienna on Tuesday, with Western officials hoping the challenge will not be made even more difficult by the Ukraine crisis.

Yaalon said that although “people know Iran cheats”, the United States and other nations chose to negotiate with Tehran on restricting activities they fear are aimed at developing atomic arms.

“Therefore, on this matter, we have to behave as though we have nobody to look out for us but ourselves,” Yaalon said, echoing Prime Minister Benjamin Netanyahu’s veiled threats of unilateral military action against Iran if diplomacy fails.

“Unfortunately, when it comes to negotiating at a Persian bazaar, the Iranians are better,” said Yaalon, a former armed forces chief and a hawkish member of Netanyahu’s right-wing Likud party.

In the Middle East, Yaalon said, he had heard “voices of disappointment” over a lack of U.S. support for Sunni Muslim rebels in the three-year-old conflict in Syria.

And on a recent visit in Asia, he added, he found “disappointment about China getting stronger and the U.S. getting weaker”.

Netanyahu, whose country is widely believed to be the Middle East’s only nuclear-armed nation, has denounced as a “historic mistake” an interim deal reached with Iran in November on curbing sensitive nuclear activities in return for limited sanctions relief.

He has demanded that any final accord dismantle Tehran’s uranium enrichment centrifuges, a position at odds with Obama’s suggestion that Iran, which says its nuclear program is peaceful, could be allowed to enrich on a limited basis for civilian purposes.

“Comfortable Westerners prefer to put off confrontation, if possible to next year or the next leadership term. But in the end, it will blow up,” Yaalon said.

The Jerusalem Post reported that the United States is using unprecedented language to condemn Israeli Defense Minister Moshe Ya’alon after he continued weeks of criticism of US President Barack Obama, and members of his foreign policy team, on Tuesday.

“We were shocked by Moshe Ya’alon’s comments, which seriously call into question his commitment to Israel’s relationship with the United States,” a senior administration official told The Jerusalem Post on Tuesday night. “Moreover, this is part of a disturbing pattern in which the Defense Minister disparages the US Administration, and insults its most senior officials.”