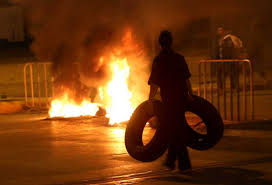 Al-Qaeda appears to be steadily building its support networks and capacity in Lebanon, where fears are growing that a new influx of militants from the Syrian border region could bolster the terror group’s ranks and stoke instability.

Lebanese authorities say that despite a rash of arrests of suspects

linked to al-Qaeda-affiliated groups in recent months, they are fighting back a relentless tide of fighters whose attacks are exacerbating sectarian tensions.

The two main al-Qaeda affiliates in Lebanon, Jabhat al-Nusra and the Abdullah Azzam Brigades, claimed a string of suicide bombings against Shiite targets during the first six weeks of the year. On Sunday, after a nearly month-long hiatus from those attacks, the fall of the rebel-held Syrian town of Yabroud to the Syrian army and fighters from the Lebanese Shiite movement Hezbollah sparked a new deterioration in the country’s security.

The rebel defeat drove a stream of Syrian opposition fighters to seek refuge in the Lebanese border town of Arsal, officials said, and triggered a nearly immediate retaliatory suicide bombing that killed three people in a Shiite town. The attack was claimed by the Lebanese branch of Jabhat al-Nusra, an al-Qaeda affiliate that is smaller than its Syrian wing.

With tensions high, Hezbollah on Tuesday tightened a blockade on roads to Arsal, a Sunni town, prompting Sunni protesters to retaliate by burning tires and blocking the highway to Shiite-dominated south Lebanon. The army fired tear gas to disperse protesters in parts of Beirut.

The influx of fighters into Lebanon is one more example of the Syrian war’s overflow across borders. On Tuesday, a roadside bombing injured three Israeli soldiers in the occupied Golan Heights bordering Syria; Israel blamed the attack on Hezbollah and jihadists.

A significant number of fighters from the Syrian wing of Jabhat al-Nusra — al-Qaeda’s representative in the Syrian war — are present in Syria’s mountainous border region, and analysts said the Syrian government’s continued efforts to squeeze out rebels from the area could push more of them into Lebanon.

That, they added, could escalate instability by significantly boosting the operational capability of the Lebanese branch of Jabhat al-Nusra, which is already gaining a foothold.

“Nusra in Lebanon are so far localized in the lawless border zones and are not that significant yet,” said Aymenn al-Tamimi, a fellow at the Middle East Forum who specializes in jihadist groups. “They appear to have just adopted the name of the Syrian group and the two have not become one yet, but that could change if there was an influx of fighters from Syria.”

Despite Jabhat al-Nusra’s limited reach in Lebanon, the group is managing to stage attacks. In a statement, it said the suicide bombing on Sunday, near the Shiite town of Nabi Othman, was carried out in retaliation for Hezbollah’s “boasting” about the rebel defeat in Yabroud.

But other terror groups, particularly the Abdullah Azzam Brigades, a Lebanese al-Qaeda affiliate, pose the most immediate threat, said a senior army officer, who spoke on the condition of anonymity because of the sensitivity of the subject. The group has asserted responsibility for double suicide bombings on the Iranian cultural center in Beirut and the Embassy of Iran, a country that backs Hezbollah and the Syrian government.

The army has largely dismantled one strand of the Azzam Brigades, which has its roots in Lebanon’s largest Palestinian refugee camp, he said, but has not arrested any members of its second cell, headed by Sirajeddine Zuraiqat, the group’s religious leader.

The Azzam Brigades suffered a blow in December, when the group’s leader, Majid bin Muhammad al-Majid, was apprehended as he sought medical treatment in Lebanon for a kidney problem, then died shortly after.

While the ranks of Jabhat al-Nusra and the Azzam Brigades are believed to be small, al-Qaeda affiliates have a large pool of disenfranchised Sunnis in Lebanon to call upon. Several of the suicide bombers in recent attacks, all of which have targeted Iranian and Hezbollah interests, have been Lebanese nationals. Others have been Palestinian and Syrian, according to Lebanese authorities.

With a vacuum in mainstream Sunni political leadership in Lebanon, Sunni youth in areas such as the northern port city of Tripoli are increasingly expressing support for extremist groups, analysts say.

“History will also record that Hezbollah is responsible of luring the Syrian fire to Lebanon,” he said.

Wafic Khalaf, a local official in Arsal, said Hezbollah had tightened its siege on the town after reports that Syrian rebel fighters had fled there from Yabroud. The Sunni town, which sits in the largely Shiite Bekaa Valley, has been a haven for fighters and refugees fleeing Syria’s war.

Khalaf denied that new fighters had arrived this week, but he acknowledged that groups such as Jabhat al-Nusra may have a presence on the town’s outskirts.

Stability in Lebanon largely hinges on the Lebanese army, which has traditionally maintained an image of standing above sectarian politics. However, Jabhat al-Nusra has declared the army a legitimate target, accusing it of aiding Hezbollah.

The United States is among the nations that have attempted to strengthen the Lebanese armed forces, describing them as the “sole guarantor” of Lebanon’s stability as it pledged renewed support and training last summer. The biggest pledge of assistance has come from Saudi Arabia, which announced a $3 billion grant in December.

Still, the army faces a daunting task. Omar Bakri Fostok, a radical Sunni preacher based in Tripoli who has been accused of links to al-Qaeda, said that a year ago he would have disputed that the global terror group had a presence in Lebanon.

But he would not do that now, he said.

“Al-Qaeda in Lebanon are like these beads,” he said, pulling out a string of prayer beads. “There were individuals, but they have always lacked the thread that holds them together. They were not organized. That is now changing.”

Photo: A Sunni protestor carries tires as a fire set by Sunni protesters burns on a major roadway between Beirut and the capital’s southern suburbs, a Hezbollah stronghold, to show support for residents of the Sunni town of Arsal, in Beirut, Lebanon, Tuesday, March 18, 2014. Gunmen from Lebanon’s militant Hezbollah group and local Shiite Muslim residents tightened their blockade of a Sunni town of Arsal near the Syrian border Tuesday, sparking concerns that thousands of Syrian refugees stranded in the area could be cut off from humanitarian aid. Photo: Hussein Malla, AP