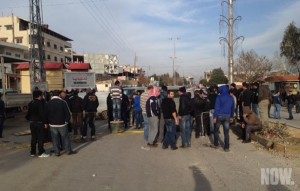 Sunni residents blocked roads across Lebanon on Tuesday in support of the Sunni border town of Arsal, which has been blocked from the Beqaa’s main highway by protesters in neighboring Shiite-populated Labwe, NOW reported on Tuesday.

Residents of the mostly Sunni Taalbaya and Saadneyel in the Beqaa valley kicked off the protests by blocking roads in their towns to show support for Arsal locals.

More roads were blocked in the evening in the Beqaa, including the Ammiq-Qob Elias route as well as the Manara-Soeira-Rashaya road, the report added.

Sidon highway leading to Beirut was was also blocked at the Al-Saadiyat point by protesters demonstrating support of Arsal.

Protesters also set tires on fire in Beirut’s Qasqas and Cite Sportive area on the edges of the Sunni-dominated Tariq al-Jedideh neighborhood, effectively blocking the two main thoroughfares linking the city’s south with its center.

The road blocking comes after Sunni clerics and figures met in Azhar al-Beqaa Mosque earlier in the day to discuss Shiite residents of Labwe blocking the road to the Sunni-populated border town of Arsal.

“If the blocking of Arsal continues , the area’s residents will close many roads in the Beqaa area, such as the Dahr al-Baydar-Beirut road, the Masnaa international highway, and the Saadnayel-Baalbek highway,” a well-informed source was quoted as saying by NOW.

This comes after gunmen from the militant Shiite group Hezbollah and Shiite residents tightened their chokehold on Arsal. The standoff around Arsal is the latest in an ever-growing spillover of the Syrian conflict into its smaller neighbor.

Also four Rockets struck the Hezbollah stronghold in the Beqaa area near the town of Labwe on Monday afternoon, injuring one resident and causing material damage, the Lebanese Army said in a statement.

The Lebanese army added that one rocket landed inside the town of Labwe, while three others hit an area between Labwe and the nearby Nabi Othman, injuring one person.

A suicide car bomb also ripped through Nabi Othman on Sunday evening following the capture of the border town of Yabrud east of Labwe by the forces of the Syrian regime and Hezbollah fighters.

The army also dismantled on Monday morning a car rigged with explosives weighing 170 kg in the Al-Fakiha area.

A young man was seriously injured after the Lebanese army deployed near Qasqas’ Al-Khasheqji Mosque and fired live rounds in the air and shot tear gas canisters to disperse the demonstration, NOW reported.

The youth was rushed to the nearby Makassed Hospital, where he died of his wounds, a source in the hospital said.