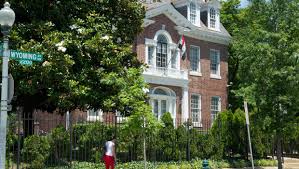 The State Department on Tuesday announced the official closing of the Syrian Embassy in Washington and said Syrian diplomats there and in consulates elsewhere in the United States must leave by the end of this month.

Daniel Rubinstein, the Obama administration’s special envoy for Syria, tied the decision to this week’s third anniversary of the beginning of the Syrian upheaval.

“In consideration of the atrocities [Syrian President Bashar al-Assad’s] regime has committed against the Syrian people, we have determined it is unacceptable for individuals appointed by that regime to conduct diplomatic or consular operations in the United States,” Rubinstein said in a statement.

He said the United States will continue to maintain diplomatic relations with Syria “as an expression of our long-standing ties with the Syrian people, an interest that will endure long after Bashar al-Assad leaves power.”

The United States withdrew its diplomats from Damascus in 2011 and formally closed its embassy there in 2012, although it has never officially broken relations with Assad’s government. The order announced Tuesday requires Syria to immediately suspend operations at its embassy and its honorary consulates in Troy, Mich., and Houston.

The embassy said in a statement on its Web site last week that it would no longer provide consular services as of Tuesday. The embassy has been operating for some time without an ambassador and with what State Department spokeswoman Jen Psaki called “limited staffing” of fewer than a dozen people.

“Diplomats and their families will have until March 31st to get their affairs in order and depart,” Psaki said. “Administrative staff will have until April 30th to appropriately shutter the mission before they must depart.”

Closure of the embassy does not affect Syria’s mission at the United Nations, although diplomats there are prohibited from traveling more than 25 miles outside New York without U.S. permission, under a State Department order issued two weeks ago.

At a town hall meeting in Washington with university students, U.S. Secretary of State John F. Kerry said Assad will never be able to regain legitimacy in Syria, regardless of whether his forces prevail in the civil war.

“The people of that country who have been driven out, whose kids, parents, brothers, sisters, grandfathers have been killed, are never going to look to him for leadership,” Kerry said.