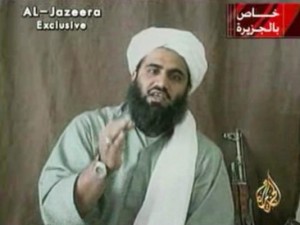 In a courtroom surprise, Al-Qaeda’s spokesman after the Sept. 11 attacks took the witness stand on his own behalf Wednesday at his terrorism trial, testifying that Osama bin Laden asked him in 2001 to lecture to training camp recruits.

Sulaiman Abu Ghaith’s decision to testify was announced by his lawyer, Stanley Cohen, who surprised a nearly empty courtroom that quickly filled with spectators as word spread.

The 48-year-old Kuwaiti-born defendant has pleaded not guilty to charges that he conspired to kill Americans and aid al-Qaeda. If convicted, he could be sentenced to life in prison.

Testifying through an Arabic interpreter, Abu Ghaith said he went to Afghanistan for the first time in June 2001 because he had a “serious desire to get to know the new Islamic government in Afghanistan.”

He said he met bin Laden for the first time when the al-Qaeda leader, who was living in Kandahar, Afghanistan, summoned him after hearing that he was a preacher from Kuwait.

Abu Ghaith said bin Laden explained that the al-Qaeda training camps involved so much weapons training and a rough, hard life that he wanted him to change that, to reach the hearts of recruits and show them another side of life.

Abu Ghaith said he knew bin Laden was suspected in terrorist attacks but still “wanted to get to know that person.”

“I wanted to see what he had, what is it he wanted,” he said.

Abu Ghaith looked relaxed on the witness stand, wearing a blue shirt, open at the collar, beneath a charcoal-colored jacket.

The announcement that he would testify energized jurors, who looked around the courtroom as it filled with representatives of the prosecutor’s office and others. Some of them leaned forward in their chairs as Abu Ghaith spoke.

The testimony comes two days into a defense presentation that followed seven days of exhibits from prosecutors.

The government said Abu Ghaith became al-Qaeda’s spokesman after the Sept. 11 attacks, warning that there would be more attacks on Americans and trying to inspire others to join al-Qaeda’s cause.