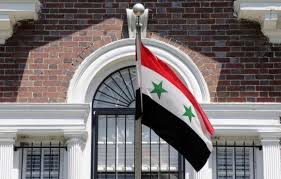 Syria and its Russian ally on Wednesday criticized the decision by the United States to suspend the operations of Syria’s embassy in Washington and consulates in other cities.

The Syrian Foreign Ministry condemned the action as a violation of international diplomatic conventions, in a statement carried by Syrian state television on Wednesday.

Moscow called it “worrying and disappointing”.

Worsening relations between the United States and Russia over Ukraine have clouded efforts by the two countries to broker a peace deal in Syria, which is in its fourth year of civil war.

The Russian Foreign Ministry suggested Washington’s actions were aimed at “regime change” to oust Syrian President Bashar al-Assad whom Russia has protected at the U.N. Security Council and with arms deals.

“The aim of regime change in Damascus prevails over the task of disarming Syria of its chemical weapons and helping millions of Syrians who have suffered from the armed conflict,” the ministry said on its website.

Syria announced on March 10 it would stop providing consular services in the United States. State Department officials said while embassy and consular activities were affected the United States was not severing diplomatic relations with Syria.

“The United States of America committed a clear violation of the Vienna conventions on diplomatic relations and consular relations by resorting to an arbitrary measure,” the Syrian Foreign Ministry said.

It said the United States had “torpedoed the fundamental legal principle of consular work by involving honorary consulates in political matters”.

Washington has dismissed news reports that Syrian diplomats have been mistreated by U.S. authorities as “completely false.”

The State Department said the missions’ closure did not constitute a break of diplomatic ties with Syria despite failed peace initiatives to end the conflict in the Arab country.

The United States Wednesday hit back at Syrian accusations that it was flouting international law by closing down Damascus’s embassy in Washington.

The State Department also denied Russian allegations that by shuttering the mission in Washington’s upscale embassy district it was abandoning its role as co-sponsor of the Syrian peace talks.

“We are abiding by not only the law but every aspect of the Vienna Convention on diplomatic relations,” State Department spokeswoman Jen Psaki said.

The US has called on Syria to find a third-party country to take over responsibility for protecting and maintaining the embassy buildings.

Otherwise, “the State Department will assume responsibility for ensuring the protection and preservation of the premises of the Syrian mission, together with its property and archives, if such arrangements have not been finalized or approved by the department, as suggested by March 31,” Psaki added.

But Psaki said the US administration remained “committed to and focused on seeing a political solution” even though the so-called Geneva peace talks have been stalled since last month.

“We remain an active and committed partner in that process,” she said, but repeated Washington’s insistence that Assad has lost all legitimacy to lead the country.