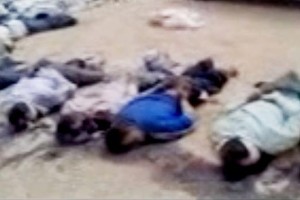 A U.N. panel investigating human rights abuses in Syria has identified those responsible for crimes including hostage-taking, torture and executions and has put their names on a list of people who should eventually be held accountable for their actions, the head of the panel said Tuesday.

His comments provided the most specific information so far about the identities of suspected criminals on the list. The panel was established by the U.N.’s Human Rights Council to investigate all alleged violations of international human rights law since March 2011 in Syria and, whenever possible, to identify those responsible so that they can be prosecuted.

“We have an enormous volume of testimony — over 2700 interviews, as well as a wealth of documentary material,” Pinheiro told the council. “We do not lack information on crimes or on perpetrators. What we lack is a means by which to achieve justice and accountability.”

In December, the U.N.’s top human rights official, Navi Pillay, said a growing body of evidence points to the involvement of senior Syrian officials, including President Bashar Assad, in crimes against humanity and war crimes. But she was careful to say she hadn’t singled him out as a suspect in Syria’s conflict, now entering its fourth year, that has killed more than 140,000 people.

Pinheiro said the panel is also investigating allegations of mass graves in northern Syria where fighters with the al-Qaida-linked Islamic State of Iraq and the Levant had “conducted mass executions of detainees.”

He said countries are under an obligation not to supply weapons to places where they might be used to commit war crimes.

“Our reports document these crimes,” he said. “No one can claim ignorance of what is occurring in Syria.”