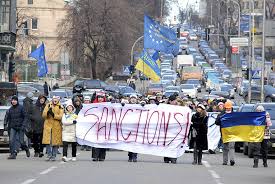 The U.S. and the European Union moved quickly to impose sanctions on Russian and Ukrainian leaders in retaliation for Russia’s plans to annex the Ukrainian peninsula of Crimea.

The U.S. sanctions targeted advisers to Russian President Vladimir Putin, lawmakers in Russia and former Ukrainian President Viktor Yanukovych for threatening the peace and stability of Ukraine. The White House said it is targeting their individual assets, not assets of companies or businesses they manage on behalf of the Russian state.

The EU slapped an asset freeze and travel ban on 13 Russian and eight Crimean leaders, marking the bloc’s first significant sanctions against Moscow for its incursion into Ukraine. EU diplomats warned that tougher measures could come by week’s end.

A senior Obama administration official said the sanctions are by far “the most comprehensive” imposed on Russia since the end of the Cold War.

The penalties come one day after citizens in Crimea overwhelmingly voted to become part of Russia in a referendum that the U.S. and its European allies have said is illegal and won’t be recognized by the international community. The U.S. sanctions also come as the European Union said it banned visas and froze the assets of 21 Russians and Crimeans. 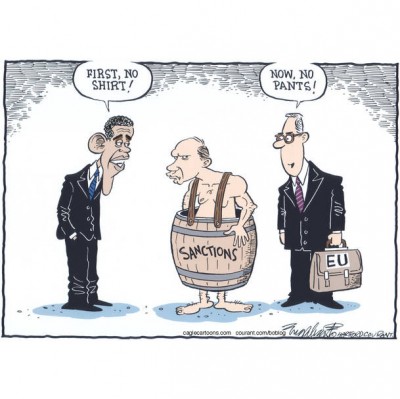 The EU backed away from imposing sanctions on any top Kremlin aides, several senior diplomats said, despite the U.S. hitting top officials in their sanctions list earlier in the day. According to two of the diplomats, Poland had proposed including Russian Deputy Prime Minister Dmitry Rogozin and presidential aides Vladislav Surkov and Sergey Glazyiev on the list, but there were broad objections to targeting them.

“We have fashioned these sanctions to impose costs on named individuals who wield influence in the Russian government and those responsible for the deteriorating situation in Ukraine,” the White House said in a statement Monday morning. The White House said it stands ready to use new authorities in a targeted fashion as “events warrant,” suggesting the penalties could be ramped up if Russia continues aggressive actions toward Ukraine.

A senior Obama administration official said the U.S. was ready to take additional and proportional steps to punish Russia.

The sanctions will likely increase already heightened tensions between the U.S. and Russia, which are at levels not seen since the Cold War. It’s unclear, however, whether the sanctions be tough enough to dissuade Russia from annexing Crimea.

For President Barack Obama, the sanctions will further strain relations with Russian President Vladimir Putin. He and Mr. Putin spoke Sunday, and Mr. Obama told the Russian president that Russia’s actions violated Ukraine’s territorial sovereignty and that the U.S. and its European partners were prepared to impose additional costs on Russia, according to a summary of the call released by the White House.

European foreign ministers stressed that tougher sanctions against Russia could be in the works, such as a broad economic or a targeting of even higher-level Kremlin leaders, if Moscow doesn’t make conciliatory moves soon. EU heads of government are meeting in Brussels on Thursday and Friday.

EU leaders also plan to sign the political portion of an “association agreement” with Ukraine on Friday. It was former President Yanukovych’s rejection of such a deal that led to weeks of protests and finally his overthrow.

The political section would require Ukraine to adhere to basic principles of democracy and human rights, but signing it would be seen more broadly as a signal that Ukraine is moving unmistakably toward Europe. The economic portion of the agreement would provide for a relaxation of trade relations, and the two sides are working on that as well.

Still, any sweeping EU sanctions against Russia could pose a challenge for Western Europe, since Russia and the EU have close trade ties. But EU officials said they would push ahead if Moscow doesn’t change course because of the importance of signaling that this type of aggression is impermissible.

“It is important that we strike the right people,” said Danish Foreign Minister Martin Lidegaard. “This means that we have to strike people who have been responsible for this, both from the Crimea but also from Moscow. The threat of even more sanctions we still have in hand.”