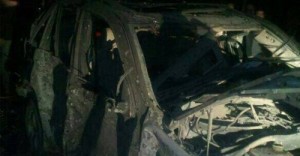 A suicide car bomb attack has killed at least four people in a Hezbollah-dominated area of the Bekaa Valley in Lebanon, near the border with Syria.

Among those killed in the attack, which struck the village of Al-Nabi Othman late on Sunday, was Hezbollah’s local leader Abdul Rahman al-Qadi who hails from the town of al-Ain, according to Al Jazeera’s Ehab al-Okadi, reporting from Lebanon.

“The blast was carried out by a suicide attacker. Hezbollah members knew he was about to carry out the attack, and tried to stop the vehicle. That was when the attacker detonated the vehicle,” a Lebanese security source told AFP.

The attack was claimed by the Al-Nusra Front in Lebanon, as well as by the little-known Liwa Ahrar al-Sunna in Baalbek, a Sunni Muslim armed group opposed to Hezbollah’s involvement in the Syrian conflict.

Hezbollah-dominated areas in eastern Lebanon and south Beirut have suffered a series of deadly attacks, many of them suicide car blasts, since the powerful Shia movement acknowledged sending fighters to Syria to support President Bashar al-Assad’s troops as they battle rebels.

After news of the attack broke, the group claimed responsibility for the blast on Twitter.

“Liwa Ahrar al-Sunna in Baalbek officially takes responsibility for the heroic martyrdom (suicide) operation ‘revenge for Yabrud’ in the village of Al-Nabi Othman,” it said.

It also warned Hezbollah and the Lebanese army – which Sunni groups in Lebanon say has sided with the Shia movement – to: “prepare for the transfer of the battle of Yabrud into Lebanese territory.”

The attack came hours after the Syrian army, backed by Hezbollah fighters, captured Yabrud, a former rebel bastion in Syria near the Lebanese border.

Hezbollah and Lebanese security forces have said many of the car bombs used in previous suicide attacks came from Yabrud.

Lebanon has been dragged into Syria’s violence by different political groups announcing support for rival parties to the war next door.

Hezbollah celebrated the Fall if Yarbood

The suicide bombing came hours after Supporters of the Iranian backed Hezbollah militant group drove on motorcycles around Beirut’s southern Dahiyeh area Sunday in celebration of the seizure of the border city of Yabroud by the Syrian regime forces and Hezbollah.

Observer predicted today more bomb attacks by the Syrian rebels in retaliation for the seizure of Yabroud that will target Hezbollah strongholds.