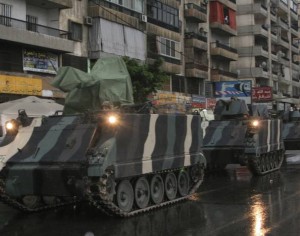 The unrest spilled over into Lebanon as clashes between rival Lebanese groups, supporters and opponents of the Syrian President regime in a Lebanese northern city of Tripoli, left at least 12 people dead and another 57 injured, the country’s National News Agency and AFP reported.

According to information obtained by MTV news, unrest erupted Thursday between the mostly Sunni residents Bab al-Tabbaneh against the mostly Alawite residents of Jabal Mohsen, after Walid Barhoum, who is a Sunni and is married to a Alawite girl had died of his wounds due to an attack by unknown assailants.

Tripoli is a majority-Sunni area known for its closeness to the armed Syrian opposition as well as the Syrian National Council.

Witnesses said that both rival fired mortars and used rocket-propelled grenades, mortars and heavy machine-guns. Adding many homes have been damaged, shops in the city were closed, streets deserted. Also schools and universities closed its doors since the beginning of the clashes.

LBC television correspondent said that sniping continued along the various traditional axes in Tripoli, mainly in Syria Street that separates the rival districts of Bab al-Tabbaneh and Jabal Mohsen.

Lebanese television channel the Future TV said that snipers were also targeting neighborhoods far from the contested areas, adding that sniper fire has reached the international highway leading to Syria and Turkey

Anadolu News Agency reported that calm reigned in at the places of the conflicts on Saturday, but this calm was repeatedly marred by sporadic gunfire.

Hezbollah-affiliated Lebanese television channel Al-Manar stated that the Lebanese Arab Democratic Party which is a pro-Syrian regime and alliance with Hezbollah announced ceasefire to restore calm in the area.

Several militants including a Syrian national have been arrested by army forces, Al-Manar claimed.

Although the Lebanese army and police are present in the area and ready for further deployment in Jabal Mohsen and Bab el-Tebbaneh, but reports indicate that the army and the police are still unable to impose security in that region till this moment.

Last month, two people were killed and nearly a dozen others injured in clashes that followed the assassination of Lebanese Alawite leader Abdel Rahman Diab, who is also a senior official in the Lebanese Arab Democratic Party.

In January, at least 10 people, including a Lebanese army soldier, were killed in five days of sectarian clashes between the two sides in Lebanon’s Tripoli.

It is worth mentioning that, the Syrian popular revolution against the regime of Assad family heightens tensions in Lebanon, which experienced 30 years of Syrian hegemony and remains deeply divided between opponents of Assad, who are backed by Washington and most of Arab states, and supporters to the Syrian regime, in particular Hezbollah and the Lebanese Arab Democratic Party.

A gathering of the city’s senior political and religious leaders called for an immediate ceasefire and stressed the need to avoid direct clashes between the army and local residents.

“All of Tripoli wants to live in peace and security within the state, but with justice, balance and equality among all, and rejects putting the city’s sons in a confrontation with the Army and security forces,” said a statement issued by the group, which met at the home of MP Mohammad Kabbara.

The group condemned the attack against the Army, and called for arresting all criminals including those responsible for two deadly car bombs last summer in the city.

“The people of Tripoli in general and [Bab al-]Tabbaneh in particular are under the law and their only demand is justice and implementing the law equally on everyone,” Justice Minister Ashraf Rifi,who hails from Tripoli said in a statement.

Photo: Lebanese army has deployed on the streets of Tripoli. Clashes between rival Lebanese groups, supporters and opponents of the Syrian regime in the Lebanese northern city of Tripoli, left at least 12 people dead and another 57 injured. Sunday March 16, 2014 REUTERS/Stringer (LEBANON – Tags: CIVIL UNREST MILITARY POLITICS)