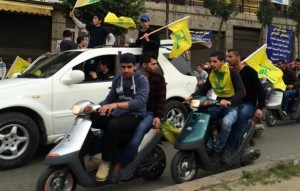 Supporters of the Iranian backed Hezbollah militant group drove on motorcycles around Beirut’s southern Dahiyeh area Sunday in celebration of the seizure of the border city of Yabroud by the Syrian regime forces and Hezbollah.

According to observers, Lebanon is bracing for more bomb attacks by the Syrian rebels in retaliation for the seizure of Yabroud that will target Hezbollah strongholds.

Photo : Hezbollah supporters celebrate the fall of the border city of Yabroud by the Syrian regime forces and Hezbollah. Photo by NOW