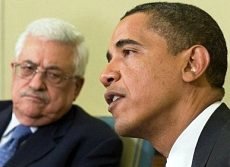 Palestinian President Mahmoud Abbas only faces bad options, from his perspective, as he heads into a White House meeting Monday with President Barack Obama. He could accept a U.S.-proposed framework for an Israeli-Palestinian partition deal, he could reject it or he could agree to extend negotiations. Here’s a look at what’s ahead.

WHAT DO THE PALESTINIANS EXPECT TO BE IN THE FRAMEWORK?

U.S. Secretary of State John Kerry hasn’t presented a written proposal, but Abbas aides say they expect it to contain the following. It would endorse the Palestinian position that the border between Israel and a future Palestine would be based on Israel’s 1967 frontier, before it captured the West Bank, Gaza and east Jerusalem, the lands the Palestinians want for a state. However, the two sides would negotiate land swaps that would allow Israel to annex some occupied lands and keep an unspecified number of settlements. The Palestinians would recognize Israel as the homeland of the Jewish people. The Palestinians would establish a capital “in Jerusalem,” but there would be no specific mention of east Jerusalem. Israel would be permitted to maintain a military presence on the Palestinian state’s eastern border, with Jordan, for some years after a deal.

WOULD ABBAS ACCEPT SUCH A PROPOSAL?

Most likely not. Abbas said recently there is “no way” he could accept some of these provisions, suggesting his people might rise up against him if he did so and that such a deal would stain his legacy. Fatah, the Palestine Liberation Organization and Arab League foreign ministers have also urged him to say no to some or all of anticipated provisions in the framework.

WHAT SPECIFICALLY DOES ABBAS OBJECT TO?

Abbas says he cannot recognize Israel as a Jewish state because this would prejudice negotiations on the fate of several million Palestinian refugees and their descendants, including their “right of return” to what is now Israel. He says it would also harm the rights of Israel’s large Arab minority.

Prime Minister Benjamin Netanyahu argues the Palestinians must bestow the special recognition to prove they are fundamentally ready to make peace.

Abbas also is concerned that Kerry is sliding back from a solution for Jerusalem proposed by then-President Bill Clinton in 2000 — Arab neighborhoods to Palestine, Jewish neighborhoods to Israel. The Palestinians fear that if they accept a vague reference to Jerusalem in Kerry’s plan, they’ll end up with a capital on the edges of the city.

In previous talks, Palestinians agreed to minor land swaps. Palestinian officials have said Kerry is now asking them to take into account “subsequent developments,” meaning Israeli settlements. Israel has said it wants to annex “settlement blocs,” which according to some officials could mean 12 percent of the West Bank, or six times as much land area as Abbas previously offered to swap.

WILL ABBAS SAY NO TO OBAMA AND KERRY?

He wants to avoid saying no for now. Both Abbas and Netanyahu are afraid of being blamed for derailing U.S. peace efforts, which resumed when Kerry got the two sides back to the table in July for what are to be nine months of negotiations. Rebuffing the U.S. would also mean a major reversal of Abbas’ political strategy, which has been based on close ties with Washington.

WILL THE NEGOTIATIONS BE EXTENDED?

For Abbas, it’s the least damaging of three bad choices. In committing to nine months of talks with Israel last July, Abbas put aside his long-standing objections to negotiating while Israel continues to expand settlements. Members of the PLO Executive Committee oppose an extension beyond the April 29 deadline if the situation remains unchanged. They say continued talks shield Israel from international criticism of its practices in the occupied lands, while enabling it to build more homes in settlements. Last year, the number of settlement housing starts more than doubled from the previous year.

However, an official close to the negotiations said Abbas leans toward an extension if he gets something in return, such as a partial settlement freeze during the upcoming period or an Israeli promise to release more long-held Palestinian prisoners. The official spoke on condition of anonymity because he was not authorized to discuss internal Palestinian deliberations with the media.

As part of the current negotiations, Israel also promised to release 104 long-held prisoners in four groups. The last release is due at the end of March.

WHAT HAPPENS IF KERRY’S EFFORTS END IN FAILURE?

Such failure could mean the end of more than 20 years of trying to reach a partition deal through U.S.-mediated bilateral talks. Critics of this approach have long argued that it’s inherently bad for the Palestinians. They say the U.S. cannot be an impartial broker because of its alliance with Israel and that negotiations between an occupier and those being occupied are little more than a charade.

Abbas has said the Palestinians have other options. Abbas has said that once negotiations have run their course, he could seek acceptance of “Palestine” — recognized by the United Nations General Assembly as a non-member observer state in 2012 — by other U.N. agencies and international conventions. This could include building a “war crimes” case against Israel over its settlements before the International Criminal Court, a move sharply opposed by the U.S. and Israel. A Palestinian-led international movement of boycott, divestment and sanctions against Israel also has gained momentum. But Israel also could retaliate against the Palestinians, both financially and with new restrictions.