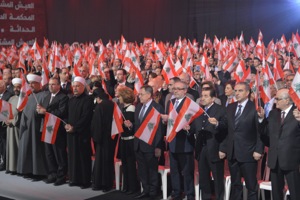 March 14 alliance celebrated on Friday the ninth anniversary of the Cedar Revolution that led to the withdrawal of Syrian troops from Lebanon in 2005 after nearly three decades of Syrian tutelage.

The ceremony emphasized the importance of the Lebanese state and the rejection of Hezbollah’s conduct.

The alliance vowed to remain united and steadfast.

“We, in March 14, have a unified vision of Lebanon, and we have a righteous and noble cause,” former Lebanese PM and current Future Movement bloc leader MP Fouad Siniora said in a speech at the BIEL exhibition center in Beirut, where the ceremony was held.

“Our struggle is one and our destiny is one; we discuss and disagree but we do not leave room for dispute between us and we do remain united”.

“Despite all the tragedies, losses, and provocations, we have not carried weapons and we will not carry weapons in the face of our families.”

“Our hand is extended to the other camp only under the authority of a just state because we reject violence and adhere to dialogue .”

“Nine years ago, the Lebanese people did not hesitate in resisting oppression,” he said.

“Lebanon will remain and tyrants will be defeated,” he added.

“Lebanon will remain through its civil peace and mutual coexistence, while the criminals’ days are numbered,” said the former PM.

“On this day, we remember our martyrs, starting with former PM Rafik Hariri and ending with Minister Mohammed Chatah,” Siniora continued.

“We all share the same fate and we are bound by the same system of rule,” he said, while denouncing Sunni and Shiite fundamentalism.

Addressing Hezbollah’s involvement in the conflict in Syria, Siniora urged the party to withdraw its fighters to spare the Lebanese people further misery.

“Those who liberated the South should not get embroiled in battles that they have nothing to do with,” he declared, while emphasizing the need to respect the Baabda Declaration.

“We will resist Israel through all legitimate means,” he stressed. 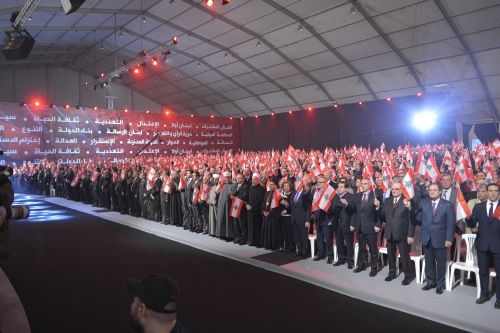 “The public of March 14 tells its leadership: Unite in the face of strife and use your unity as the strongest weapon in the face of those who want to plant fear in us,” Soueid said.

“The blood of the martyrs keeps calling us to continue to be united in our stances. March 14 is a national legacy, let us maintain it together.”

“The goals of the camp are greater than whether they will take part in a cabinet or not,” remarked Soueid.

He also stressed the importance of standing against Hezbollah’s arms, emphasizing the need for staging the presidential elections.

Phalange MP Sami Gemayel said that “March 14’s unity is above all other considerations no matter how difficult the circumstances are, and the goal will remain one, which is to build an independent civilized state.”

He slammed Hezbollah’s conduct which has “driven the people outside of their country.”

“Our problem with Hezbollah is not that we differ in opinions, but that it did not adhere to democracy and the constitution,” he explained.

“The Lebanese people’s lives over the past eight years have been usurped,” he declared.

“What kind of life has Hezbollah led us to that makes parents worry if their children will ever return home from school?” he wondered in reference to suicide-bomb attacks that have plagued Lebanon since Hezbollah acknowledged that it was taking part in the conflict in Syria.

“What kind of life are we leading?” Gemayel asked.

“The March 14 movement refuses to respond to violence with violence. I was disappointed with some concessions, but they were made for the sake of Lebanon,” the MP continued.

They were made to avoid division and maintain coexistence, he added.

“We have a major responsibility towards our supporters to perform better than we did in the past nine years,” stated Gemayel.

“We must not surrender, but we must defend all that preserves our country. We must wage all battles that will defend Lebanon, its institutions, constitutions, and democracy,” he vowed.

Commenting on the ongoing dispute over the government policy statement, the MP said: “The media is saying that the dispute revolves around a single word.”

“Is it possible that the whole country has reached a standstill over a single word?” he wondered.

“This one word is the ‘state’ and we will never abandon it because it belongs to all of the Lebanese people,” Gemayel stressed.

“Hezbollah does not realize that the state is the place where partnership between powers is exercised,” he explained.

“The party has no choice but to return to Lebanon. It will return to the state and the Shiite population will no longer remain outside of it,” he added.

“The parents of the youths being killed in wars they have nothing to do with will not remain silent forever,” he warned in reference to Hezbollah’s fighting in Syria.

“We believe in a strong state that enjoys modernity, culture, and a competent economy. This is the state that Hezbollah is depriving us of,” he declared.

“The unity of the March 14 camp will remain above all else. Our goal will remain the building of an independent and sovereign state,” he added.

He added that differences of opinions among the alliances parties were natural, saying that “the most certain thing is that each one of us has his own opinion because we are free.”

Lebanese Forces leader Samir Geagea dismissed reports he would leave the alliance, saying, “We will not leave March 14 because it is the ammunition of the generations, the grandfathers, and the martyrs.”

“We will not accept to compromise any principle and we will not give up a right no matter how great the sacrifices might be.”

“Our fellow martyrs, do not worry, the Cedar Revolution will remain, since the cause is well guarded.”

Geagea stressed that the main mission of the March 14 alliance must be electing a Lebanese president to “correct the course of events and lift Lebanon from the bitter reality and build the desired state.”