Rifi tells Assad: Lebanese presidency is none your business 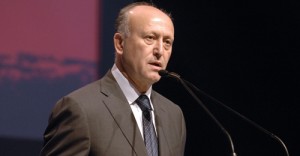 Justice Minister Ashraf Rifi lashed out at Syrian president Bashar al-Assad Friday for remarks over what constitutes a good Lebanese president telling him our presidency is none of your business and Syrian tutelage has ended.

“It is not within the power of the Syrian president to choose a president for Lebanon,” Rifi said in a tweet on Friday.

“The time of the Syrian tutelage has ended and we shall not accept attacks on Lebanon’s sovereignty and institutions by anyone.”

Assad recently told visitors that the most important quality in the next Lebanese president is the level of “resistance” he is able to grant, in reference to the Syrian regime’s political stance towards Israel.

“We are not waiting for the person himself; rather, for his selection,” Lebanese daily As-Safir quoted Assad as telling visitors in an article published Friday.

“ We are waiting to see what he will be able to grant as far as resistance is concerned, which is a fundamental criterion for us, afterwards let he who comes come. That is an internal Lebanese affair.”

Assad praised Hezbollah chief Hassan Nasrallah : “Nasrallah’s position shows loyalty and demonstrates that we are in the same boat.”