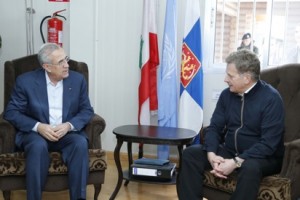 Following his meeting on Thursday with Lebanese president Michel Suleiman at the Baabda presidential palace , Finnish President Sauli Niinistö said that his country was keen on supporting Lebanon to confront the crisis of the Syrian refugees.

“No state has ever confronted what Lebanon is facing,” Niinisto said during a joint press conference with Suleiman.

“We want to provide the biggest possible support to Lebanon” in that regard, he said.

“Everyone should work on supporting Lebanon,” he added.

“We are happy to have participated in the [donor countries] meeting in Paris, and we want to offer as much [aid] as possible,” he added

“It is important to distribute the numbers of Syrian refugees among various countries,” Suleiman said .

Suleiman also called for facilitating the return of Syrian refugees to their country “as soon as [this option] becomes feasible.”

The president also expressed hope that a political solution be reached to solve the Syrian crisis away from any external military intervention.

During the second International Support Group for Lebanon meeting held in Paris on March 5, Finland pledged a $3 million contribution to the Lebanese economy through a World Bank trust fund.

“I thanked President Sauli Niinisto on Finland’s support for Lebanon and its participation in UNIFIL,” said Suleiman, a day after they visited UNIFIL’s Finnish contingent in the South.

“We stressed the importance of trade ties … and the exchange of expertise in several fields,” he told reporters.

Following the press conference Suleiman hosted a lunch banquet in honor of the visiting Finnish president.