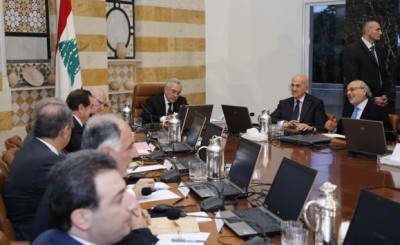 Lebanon’s Cabinet met Thursday at the Baabda Presidential Palace to discuss the formula that will be used in defining Lebanon’s resistance against Israel in the ministerial policy statement after the ministerial committee failed  during 10 meetings to agree on a draft due to a dispute over Hezbollah’s arms in the clause.

President Michel Suleiman chaired the Cabinet session and said during the opening of the meeting that he is hoping that the policy statement will be approved tonight, stressing that “it must not be put on hold for the sake of one phrase” and that “the Lebanese are pinning their hopes on this cabinet.”

He added: “Discussions over the formula proposed by Health Minister Wael Abou Faour are still ongoing after he and Foreign Minister Bassil introduced amendments to it.

Here are some of the suggested formulas being discussed:

LBCI reported that one of formulas that is being discussed at the meeting states “the right of the Lebanese to liberate the Shebaa Farms through all available means based on the legitimacy of the state, which abides by implementing the general policies vested in it by the constitution.”

OTV reported that the other formula that is being discussed at the meeting states “the state’s duty to preserve its sovereignty and the right of Lebanon and the Lebanese to liberate their land and resist any aggression or occupation.”

OTV also reported that a formula that emphasizes the authority of the state and the right to resistance is awaiting the approval of the parties.

OTV also reported that a formula that is currently being discussed states “the responsibility of the state regarding liberation and the right of the Lebanese people to confront occupation.”

LBCI reported that meetings are being held on the sidelines of the cabinet session, most notably between Hassan Khalil, Abou Faour and Akram Shehayyeb and the cabinet meeting has almost been suspended.

Media sources reported that the ministers were referring to their respective party leaderships before giving their answers to the proposed formulas.

It appears that the cabinet failed to resolve the impasse over the formula. MTV reported that attempts to convince PM Salam to postpone his resignation until tomorrow have not been successful until the moment.

MTV reported that ” Hezbollah is insisting on mentioning ‘the resistance’ in a clear manner in the policy statement, which returns discussions back to square one.”

The meeting was adjourned until Friday after the parties failed to reach an agreement over the policy statement.

FM Gebran Bassil told OTV: “What happened today was an insult to Lebanon and its army, people, resistance and state.”

Shebaa farms and Kfar Shouba Hills were occupied by Israel in the 1967 war. The Syrian army was stationed in these 2 areas when Israel occupied them as part of the Golan heights territories.The Syrian regime claims that these 2 areas are Lebanese and has the documents to prove their Lebanese identity this but refused so far to share these documents with Lebanon and the United Nations despite several requests by the Lebanese government and the UN.

All the 3 areas; Shebaa farms , Kfar Shouba Hills and Ghajar are located on the Lebanese Golan Heights borders. Syria so far has refused to demarcate its borders with Lebanon, reportedly because it is using the 3 occupied areas as an excuse for Hezbollah to keep its arms.