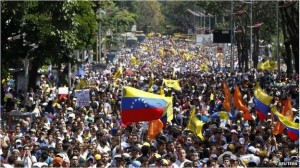 Venezuela’s attorney general on Thursday raised to 28 the official death toll in the violence linked to nearly a month of anti-government protests against leftist President Nicolas Maduro.

Another 365 people have been injured, including 109 members of the security forces, Luisa Ortega told Globovision from Geneva, where she is attending UN meetings.

“I must clarify that of the people who have died four were public officials: a prosecutor and three National Guardsmen,” she said.

Ortega added that the three guardsmen died from gunshot wounds that, she said, prove that the demonstrations have not been peaceful.

“They have been violent demonstrations because, in addition, we have seized 25 firearms from people who have been apprehended during the demonstrations,” she said, going on to explain that explosives, including Molotov cocktails and even C-4, had been seized from some people.

The government, meanwhile, has said that there are groups that are only seeking to create turmoil so that the situation becomes uncontrollable and international intervention is justified, and in support of that viewpoint it pointed to the fact that on Wednesday snipers fired on a march in the central city of Valencia, where three people were killed.