Battle over control of media, culture heating up in Iran 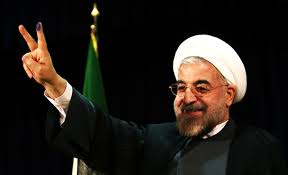 A long-smoldering battle over government control of media and culture in Iran is heating up, as opposing political forces fight over where the limits should be drawn on access to information.

Iran’s president, Hassan Rouhani, and his supporters argue that press restrictions should be reduced and that the public should be trusted with greater access to the Internet and television.

Hard-line conservatives, meanwhile, believe that such freedom would undermine the country’s Islamic rule.

The debate intensified last week when Ali Jannati, the minister of culture and Islamic guidance under Rouhani, described as “ridiculous” many of the policies that Iran has adopted since the revolution of 1979 to control the flow of information, including filters on the Internet.

“We cannot restrict the advance of [such technology] under the pretext of protecting Islamic values,” Jannati said in a meeting with Iran’s chamber of commerce.

His ministry oversees the licensing of nearly all forms of media in Iran, including newspapers, films and books, and is also in charge of reviewing, and potentially censoring, content before it is made available to the public.

Jannati, whose father is one of Iran’s most powerful and conservative clerics, is considered a reformist, and many here have interpreted his appointment as a sign of Rouhani’s commitment to public demands for a freer media environment.

Some have called for him to go further. In an open letter, more than 400 Iranian journalists recently protested plans that would require individual reporters to be licensed by the ministry based on periodic evaluations of their work by the ministry.

The journalists acknowledged in the letter that some restrictions had been loosened since Rouhani took office. But it said that the licensing process, if implemented, would be an “obstacle” to any attempts to promote freedom of speech in Iran.

Since Rouhani entered office, gradual improvements in the media landscape are being felt, but there have also been setbacks.

Some prominent figures have reappeared on state television for the first time since being banned in 2009 for their part in a post-election protest movement. Several reformist publications have reopened after being shut down during the presidency of Mahmoud Ahmadinejad, Rouhani’s predecessor.

But other publications have been closed, and Rouhani has remained at odds with the state television chief, who is appointed not by the president but by Ayatollah Ali Khamenei, Iran’s supreme leader.

“The government is in favor of freedom of expression with responsibility,” Rouhani said on Saturday at the closing ceremonies of an annual festival celebrating local media, in which he railed against the recent closure of newspapers associated with reformist politicians.

Rouhani’s efforts, according to the United Nations secretary general, are not enough.

“The new administration has not made any significant improvement in the promotion and protection of freedom of expression and opinion, despite pledges made by the president during his campaign and after his swearing-in,” Ban Ki-moon said Tuesday in a report to the United Nations Human Rights Council.

Rouhani’s ideological rivals within Iran may be his biggest roadblocks to change.

Officials who oppose the relative openness publicly espoused by Rouhani argue that Iran’s Islamic society is being corrupted by values and ideas that they deem are a part of what they call the West’s long-standing “soft war” against Iran.

“The cultural officials should pay attention to what they’re doing because in cultural matters, one cannot be reckless,” Khamenei said at the recent semiannual meeting of the Assembly of Experts, a powerful governing body consisting of current and former officials tasked with supervising the supreme leader’s activities.

At last Friday’s weekly prayer gathering at Tehran University, the prayer leader addressed the issue in his sermon, urging Jannati, the culture minister, to be tougher, especially in censoring expression that may be deemed un-Islamic.

“Cultural officials must be careful not to let our enemy inject its dangerous culture into our society,” Mohammad Ali Movahedi Kermani, the prayer leader, said.

Despite efforts to regulate the influence of foreign ideas and images, the growing exposure of Iranians to Western culture in their daily lives is undeniable.

Millions of Iranian homes have illegal satellite dishes that give residents access to a range of channels from all over the world, and Jannati estimated that there are 4 million Facebook users in Iran.

Even in more controlled environments, the reach of foreign media and popular culture is easily felt.

Perhaps most surprisingly is how deeply foreign influence has penetrated state television broadcasts, long an arena tightly controlled by hard-liners.

On Monday, officials at the state-controlled Channel 1 said they would be airing Oscar winners “12 Years a Slave” and “Gravity” during the Iranian New Year holidays, which begin next week.

Mehdi Faraj, who heads Channel 1, described “12 Years a Slave” as “agreeable to our objectives and policies.”

Neither film was produced in the United States, and Faraj was quoted as describing them as not reflecting the “politically biased attitudes” of Hollywood.