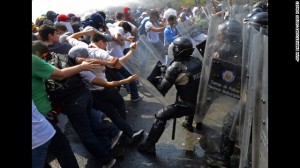 A university student, a National Guard captain and a third man were shot to death in separate incidents Wednesday as anti-government protests roiled the central Venezuelan city of Valencia. Three National Guardsmen and several protesters were wounded.

Two of the deaths came in the opposition-dominated Isabelica neighborhood, where residents unhappy with the scarcity of basic items and rising unemployment from the closure of some businesses in the area have protested for weeks by blocking streets and throwing rocks at police.

Valencia Mayor Miguel Cocchiola said a man was killed and six people wounded in Isabelica. The newspaper Notitarde de Valencia said the dead man’s cousin, Luis Acosta, identified him as 22-year-old student Jesus Enrique Acosta and said he was killed near his home by men on motorcycles, but it was unclear if the victim was participating in a protest.

The opposition has accused the government of supporting armed civilian thugs who attack protests.

The mayor later said through his Twitter account that another man, 42-year-old Guillermo Sanchez, also died from a gunshot wound in Isabelica. He said Sanchez was painting the front of his house when he was shot.

Carabobo state Gov. Francisco Ameliach, who supports the socialist government of President Nicolas Maduro, announced via Twitter that National Guard Capt. Ramzor Ernesto Bracho also was killed in Valencia. The federal prosecutor’s office said another guardsman was wounded in that shooting. The office reported earlier that a lieutenant colonel and two guardsmen were wounded by bullets while clearing a barricade blocking a highway in the city.

A month of student-led demonstrations in a number of Venezuelan cities has left at least 25 people dead, according to the government. Venezuelans fed up with inflation that reached 56 percent last year, long lines for buying some items at grocery stores and one of the highest homicide rates in the world have joined students in protesting against the government.

Maduro’s governing bloc, which easily won municipal elections in December, shows no sign of collapse. The president accuses the opposition of trying to instigate his overthrow, but his party controls the legislature and judiciary, retains the support of the military and counts as members the governors of all but three states.

After mentioning the Valencia violence to a group of students at a government rally, Maduro said he would convene a special meeting of his security cabinet Wednesday evening. “I’m going to take drastic measures with all of these sectors that are attacking and killing the Venezuelan people,” he said.

In the national capital of Caracas, pro- and anti-government student groups approaching 10,000 people staged competing marches. When the larger opposition group tried to move toward the chief public defender’s office to demand his resignation, security forces blocked the way. After negotiations failed to break the impasse, some protesters hurled rocks and National Guard troops responded with water cannons and tear gas.

Jorge Olivares, a 21-year-old chemical engineering student at Simon Bolivar University who joined the anti-government march, said the protests would not push Maduro from office, but expressed hope that the general discontent would guarantee a win for the opposition in the next election.

He also said security forces seemed to be getting tougher in dealing with the daily protests.

“Something has changed,” Olivares said. “Each time there’s more repression.”

In Washington, U.S. Secretary of State John Kerry left open the possibility of sanctions, but said there was concern that in Venezuela’s fragile economic state that sanctions might not be appropriate.

He said Maduro’s frequent accusations that the U.S. is participating in a conspiracy against his government have made it difficult for the U.S. to influence the situation.

“We have become an excuse, we are a card they play,” Kerry said. “I regret that because we pretty much opened up and reached out in an effort to say, ‘It doesn’t have to be this way.’”

The UNASUR group of South American nations said Wednesday that it will send a commission of foreign ministers to Venezuela in April to encourage dialogue on resolving the political conflict. The Venezuelan political opposition and student leaders have refused to speak with the government until it releases jailed protesters.