by yalibnan
558
WASHINGTON’S SEEMING inability to focus on more than one international crisis at a time has been a boon to Syrian dictator Bashar al-Assad. It also has diverted attention from the bankruptcy of Obama administration policy.
Share: 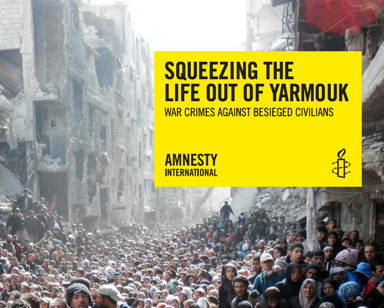 WASHINGTON’S SEEMING inability to focus on more than one international crisis at a time has been a boon to Syrian dictator Bashar al-Assad. It also has diverted attention from the bankruptcy of Obama administration policy.

As Russia invaded Ukraine, the Assad regime proceeded unmolested and almost unnoticed with a merciless offensive of “barrel-bombing,” in which helicopters drop explosive containers filled with nails and other deadly shrapnel on apartment buildings, schools and hospitals. The latest target is the town of Yabroud, near the Lebanese border. In other areas, the regime continued to wage a war of starvation, besieging civilians in violation of a U.N. Security Council resolution approved more than two weeks ago. According to a new report by Amnesty International, at least 194 civilians have died in Yarmouk, a Palestinian refu­gee camp, since a siege began in July. The leading causes of death are starvation, lack of medical care and shooting by snipers.

Mr. Assad is missing deadlines on the promised destruction of his chemical weapons arsenal. Two deadlines for handing over chemical stocks have passed, and international inspectors say the regime will likely violate a March 15 requirement for destroying 12 production facilities. A bogus election is being prepared to extend Mr. Assad’s presidential term for another seven years. That follows the regime’s refusal to discuss a plan for a transitional government at a peace conference in Geneva last month, which caused the talks to collapse.

The breakdown in Geneva stripped the Obama administration of the fig leaf it had used to cover its failure to develop a workable policy for Syria. For nine months, Secretary of State John F. Kerry had claimed that, in concert with Russia, the United States would use the Geneva process to end Mr. Assad’s rule. As that fantasy unraveled, President Obama hinted at new strategies: “We are continuing to explore every possible avenue to solve this problem,” the president said Feb. 11.

If there has been a change in U.S. policy since then, it hasn’t been detectable. The Democratic chairman and ranking Republican on the Senate Foreign Relations Committee both expressed bewilderment at a hearing last week over the administration’s seeming inactivity. “I question whether or not we are truly committed to changing the battlefield equation,” said Sen. Robert Menendez (D-N.J.).

Deputy Secretary of State William J. Burns stated bluntly that Syria now presents “enormous challenges” to U.S. interests that “require a steady, comprehensive American strategy.” Matthew Olsen, head of the National Counterterrorism Center, said, “Syria has become the preeminent location for al-Qaeda-aligned groups to recruit, and to train and to equip, what is now a growing number of extremists, some of whom seek to conduct external attacks.”

Yet when senators asked about the U.S. response, Mr. Burns could offer only vague phrases about “ways to support the moderate opposition” and coordination with other rebel supporters. As Sen. Bob Corker (R-Tenn.) noted, “We have been hearing this for years now, and since we first began hearing it, I would guess a hundred thousand people have died.”

The Obama administration unquestionably must answer the Russian offensive in Crimea. But that does not lessen the critical threat to U.S. interests in Syria or excuse the president’s continuing passivity. It’s time for decisive steps to achieve the U.S. objectives of checking al-Qaeda and reversing the regime’s military momentum.