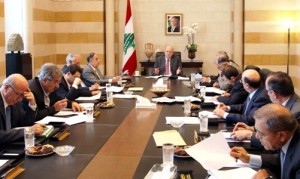 The committee charged with drafting the new government’s policy statement failed again on Tuesday to agree on a draft that meets the demands of the rival March 8 and 14 camps and for this reason it decided to refer the issue to the cabinet, which will convene on Thursday to take the appropriate stance on the matter, said the PM’s office

Labor Minister Sejaan Qazzi told reporters after the committee’s tenth meeting: “Hezbollah is still insisting that the resistance be granted freedom of mobility and action away from the authority of the state.”

On the other hand the March 14 camp has been insisting that the policy statement highlight the importance of the state’s authority.

“Given this discrepancy in positions between the March 8 and 14 camps, the panel decided to refer what it has achieved so far in the policy statement to cabinet,” added Qazzi.

“Each camp presented its own proposal over the statement, but the discussions made it clear that an agreement over one draft was not possible at the moment,” said minister Qazzi..

Qazzi added: “It is clear that one camp ( Hezbollah led March 8 alliance) is rejecting any reference to the state in the policy statement. This contradicts with the position of the March 14 alliance.”

Lebanese President Michel Suleiman said on Tuesday during a ceremony at the presidential palace that the Baabda Declaration which serves the national charter and independence was not respected and therefore politicians must apologize to the Lebanese people.

“What was agreed upon in the Baabda Declaration was not respected and we must apologize to the Lebanese people ” Suleiman said at the ” excellence award” ceremony in a possible reference to Hezbollah.

He stressed that the “ministerial policy statement should be based on national consensus and for this reason should be written according to the Baabda Declaration.”

“The Baabda Declaration is also the main reason why the support group for Lebanon was formed in New York and Paris and whoever opposes it would be hampering international aid. .”