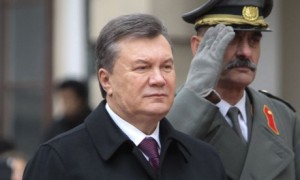 These are some of the expenses detailed in financial documents found in President Viktor Yanukovych’s abandoned residence, which was occupied by protesters after the leader fled the capital.

As thousands of Ukrainians continued to tour Yanukovych’s opulent estate outside of Kiev on Sunday, evidence was uncovered of lavish spending in an economy that is teetering on the verge of default.

Yanukovych left Kiev on Friday night after opposition protesters took control of the capital and the national parliament in the wake of deadly clashes with police last week. More than 70 people were killed and hundreds were injured.

While visitors gawked in awe and outrage at Yanukovych’s luxurious mansions, ponds and exotic animals, journalists combed through heaps of documents that appeared to show a leader who basked in extravagant wealth while his country sought bailouts from both the West and Russia.

Many of the financial and other documents were burned, while others were dumped in a lake before Yanukovych fled his closely guarded residence, flying to the eastern city of Kharkiv, where his support base is strongest. Divers were able to retrieve many of the documents, and activists laid them out to dry.

Photos of the documents were posted online by Mustafa Nayem, a top Ukrainian investigative journalist for the Ukrainska Pravda website and Hromadske.tv online news channel. Other respected Ukrainian news outlets also reported on the documents.

Notably, $115,000 was spent for a statue of a “running boar,” possibly intended for Yanukovych, who is an avid hunter.

The documents were sure to fuel more anger among protesters.

Yanukovych’s whereabouts were unknown Sunday. An aide said she last spoke to him Saturday night and he considered himself the legitimate president of Ukraine and did not intend to leave the country.

His residence in the Mezhygirya Park, about 140 hectares (345 acres) of forested hills along the Dnipro River had become for many Ukrainians a symbol of a corrupt administration. The president refused to answer questions about the estate, saying he lived in a modest house on a small plot of land on the grounds.

Journalists’ investigations traced the property and buildings around it to Yanukovych’s allies.

After Yanukovych’s departure from Kiev, the estate was taken over by the opposition’s self-defense units, which opened it to visitors and deployed activists to maintain order and prevent any looting or property damage. Ukrainians, many bringing their children, rushed to tour the parks. They reacted with wonder and revulsion at the opulence, including Yanukovych’s private golf courses, pig farm and a small zoo with ostriches and peacocks.

Some have called for turning the site into a hospital, sanatorium or even a “museum of corruption.”

The Verkhovna Rada — Ukraine’s parliament that is now controlled by the opposition — voted Sunday to turn over control of the estate to the government.

Yanukovych’s lifestyle was on the minds of some in the crowd of thousands who flocked Sunday to the epicenter of the protests in Kiev’s central square, known as the Maidan. The people paid their respects to those demonstrators who died in the unrest.

Yaryna Mosur, who left her two children in western Ukraine to take part in the protests, stood on the square wrapped in the Ukrainian flag as a black-robed Orthodox priest led prayers from a stage.

She said she was infuriated by the wealth on display in Yanukovych’s estate.

“We are all in shock, but he will pay for it all dearly,” Mosur said.