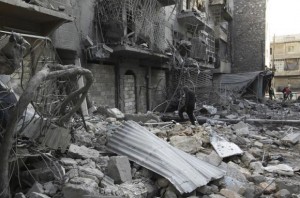 The U.N. Security Council will vote on Saturday on a resolution to boost humanitarian aid access in Syria, where the United Nations says 9.3 million people need help, although it is unclear if Russia and China will support or veto the draft.

Australian U.N. Ambassador Gary Quinlan, who co-authored the text with envoys from Jordan and Luxembourg, told reporters the vote would be held at 11 a.m. (1600 GMT) on Saturday.

The text includes demands for cross-border aid access and an end to shelling and aerial bombardment, including barrel bombs, and threatens “further steps” in the event of non-compliance. These were among the main sticking points during almost two weeks of negotiations on the draft, said diplomats.

Russia, supported by China, has shielded its ally Syria on the U.N. Security Council during the three-year-long civil war. They have vetoed three resolutions condemning Syria’s government and threatening it with possible sanctions.

Western diplomats said a possible Friday vote by the 15-member council was pushed to Saturday after Russia said it needed more time.

“A delegation has requested to have some time to get some instructions from its capital,” French U.N. Ambassador Gerard Araud said, although he did not name the country.

Russian Foreign Minister Sergei Lavrov said on Monday Russia would block the adoption of a resolution that allowed aid convoys to enter Syria without the consent of the Damascus government.

During a visit to Baghdad on Thursday, Lavrov said the resolution should spell out that cross-border aid deliveries should be organized in accordance with international humanitarian law, which requires a government’s consent for such a move.

“I don’t see why people cannot reiterate this, especially since we have so many examples when not food, not medicine, but arms and other equipment for the fighters are being supplied across border,” Lavrov said. “If people are so concerned about using this particular method of providing assistance they could use the same routes they use to supply arms.”

Chinese Foreign Ministry spokeswoman Hua Chunying said on Thursday that China believes any action by the Security Council “should be conducive to pushing for a political solution to the Syria problem.”

“The relevant action should also respect the U.N.’s guiding principles on humanitarian aid, upholding fairness and neutrality,” she told reporters in Beijing.

Western members of the Security Council have been considering a humanitarian resolution for almost a year. After months of talks, the council adopted a non-binding statement on October 2 urging more access to aid, but that statement produced only a little administrative progress.

photo: A man walks amid rubble of damaged buildings in the al-Myassar neighbourhood of Aleppo February 19, 2014. REUTERS/Jalal Al-Mamo