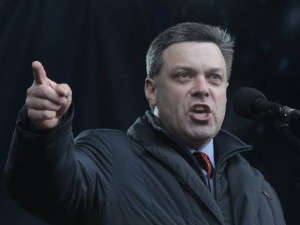 A council representing anti-government protesters in Kiev on Friday backed a draft agreement with President Viktor Yanukovich on ending the country’s crisis but set conditions, an opposition leader was quoted as saying.

Interfax news agency quoted Oleh Tyahnibok, a far-right leader, as saying the deal should stand only if there were guarantees that the present interior minister and prosecutor-general were not included in any interim government.

A European Union source said the council had voted to back the draft deal after talks with two EU foreign ministers. The protesters’ backing had emerged as the main obstacle to the deal being signed.