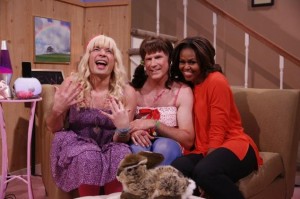 Michelle Obama’s appearance on “The Tonight Show with Jimmy Fallon” Thursday was anything but a drag.

The same thing, however, couldn’t be said for the newly minted affable host, who donned women’s garb in a hilarious sketch featuring the first lady and a cross-dressed Will Ferrell.

The skit, titled “Ew!” showcased the unlikely trio as teenage girls, with Valley girl accents, having a slumber party.

“One of my favorites is figure skating,” Obama replied.

“Me, too!” Fallon screamed, before the trio engaged in a “triple hand hug,” eliciting wild laughter from the crowd.

The conversation quickly, and humorously, turned to exercise — a topic Obama has pushed as part of her “Let’s Move” campaign.

“I do try to exercise every day,” she said.

“Really? Because I think exercise is ew” Ferrell joked.

“Exercise is not ew,” an exasperated Obama replied.

Later in the show, Obama sat down on the couch for a one-on-one with Fallon, now dressed appropriately in a suit.

Sporting a gorgeous black sleeveless dress, Obama offered her praise to Fallon, who took over this week as host of the long-running NBC “Tonight Show” franchise, before moving on to a lengthy conversation about the Olympics, the Affordable Care Act and her children, Sasha and Malia.

“My kids … they want nothing to do with us,” Obama said after Fallon asked whether her kids get “perks being the kids of the first lady.”

“They really want normalcy and the White House isn’t normal,” Obama said, explaining that one disadvantage of White House life for her kids is that they don’t need to learn to drive a car.

“Malia is going to turn 16 this summer so we’re kind of dealing with that,” Obama said. “We’re going to have to figure that (driving) out, so ladies and gentlemen of (Washington) D.C., watch out.”

Earlier in the show, just his fourth as host, Fallon led with an amusing presidential-themed monologue.

“The President hosted a screening this week of the Monuments Men,” Fallon quipped about the upcoming World War II movie featuring Matt Damon and George Clooney.

Fallon’s first week on the job has been marked by a procession of A-list celebrities and musicians, including Will Smith, Lady Gaga, Jerry Seinfeld and U2, and hilarious routines.