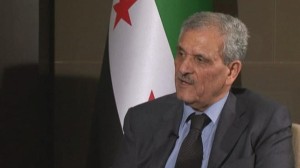 Syria’s rebels are launching a new push to persuade the Obama administration to provide them with advanced weapons, citing the intransigence shown by President Bashar al-Assad’s government at stalled peace talks in Geneva as evidence that more military pressure is needed on his regime.

Western and Arab backers of the moderate rebels grouped under the umbrella of the Free Syrian Army have promised significant new supplies of arms now that the talks have foundered, according to Assad Mustafa, the defense minister in the opposition’s interim government, who is newly in charge of channeling donations of support.

But such promises have failed to materialize before, and the rebels remain unconvinced, he said.

“We got many promises before that weren’t fulfilled, but now there are more serious promises,” Mustafa said after three days of meetings with rebel commanders in the southern Turkish town of Gaziantep. Because the Geneva talks failed to deliver results, “the world now realizes what this regime is like and is more inclined to help us.”

Secretary of State John F. Kerry blamed Assad for the failure of the talks and has indicated in recent days that the United States is again revisiting its Syria policy. But the Obama administration remains deeply averse to becoming entangled in Syria’s complex civil war.

A U.S. plan to arm moderate rebels last summer was quickly downgraded to the brief provision of a limited quantity of small arms and training for a small number of rebels in the south, fueling disillusionment among Syrian rebels about the lack of Western support.

The United States has long pushed for the formation of a coordinated rebel command through which to channel aid, but rebel commanders say the efforts have been undermined by the failure to provide any significant quantities of aid. That has trapped the rebellion in a vicious circle, the opposition says, in which the lack of American support empowers extremists, further deterring U.S. support.

U.S. allies, including Saudi Arabia and Qatar, have funneled weaponry to various rebel factions over the past two years. But they have tended to bypass U.S.-backed structures and to favor Islamist groups, many of which are now at odds with the Free Syrian Army.

Mustafa said he hopes to change that with a major restructuring of the Free Syrian Army that will put him in charge of the weapons supply. A former agriculture minister in the Syrian government, he came out of retirement in Kuwait to join the opposition and was appointed defense minister in the fledgling interim government formed by the Syrian Opposition Coalition late last year.

The goal, he said, is to create a new, moderate rebel army under a single command to fight both Assad’s regime and the growing threat posed by the Islamic State of Iraq and Syria, the renegade al-Qaeda faction that has taken over much of the territory once controlled by FSA rebels in northern Syria.

As part of the reorganization, the former head of the U.S.-backed Supreme Military Council, General Salim Idriss, was replaced at a meeting of rebel commanders on Sunday by a military commander on the southern front, Abdul-Illah al-Bashir. Some coalition members, speaking privately on the sidelines of the meeting, said personality differences between Mustafa, allied with the Saudi-backed leadership of the coalition, and Idriss, who has the support of Saudi Arabia’s rival Qatar, were behind the ouster. Mustafa said Idriss’s failure to deliver on promises of weapons was primarily responsible for his removal.

But he also said that he plans a broader reconfiguration in which the defense ministry in the opposition’s fledgling government-in-exile oversees the procurement and channeling of assistance, while the military council focuses on the battlefield.

“The Supreme Military Council will be one of the bodies serving under the ministry of defense,” he said. “Like it is in Europe.”

Mustafa acknowledged the difficulty of uniting the fractious and greatly weakened rebel force, which has been depleted and dispersed by the challenge of fighting against both the government and ISIS extremists. With the rebels now in danger of losing more territory to the government’s punishing barrel bomb campaign, there is an urgent need for anti­aircraft weapons as well as anti­tank weapons, he said.

Such weapons are included in the most recent promises the rebels have received, he said — but they have been promised in the past as well and have not arrived. He appealed to President Obama to ensure the promises are fulfilled.

“We hope President Obama will accept this and will realize that his bet on the Syrian regime is false,” he said. “We were right when we told the international community that this regime will only listen to the language of force.”