Berri : Bombings should be a priority for new cabinet 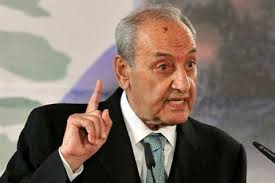 Speaker Nabih Berri said that dealing with latest suicide bombings in Beirut should be the priority for the new cabinet.

“What happened is a principle challenge for us and a priority for the cabinet,” Berri was quoted as saying by National News Agency.

“I call for the highest degrees of alert and caution to face these incidents,” he added.

Berri’s remarks were made following Wednesday’s twin suicide bombings near an Iranian cultural center in Beirut on Wednesday which killed at least six people and wounding scores, including children in an orphanage, in the latest attack targeting Shiite areas in Lebanon.

An al-Qaida-linked group claimed responsibility for the bombings, saying they were retaliation for Hezbollah’s involvement in the Syrian war alongside President Bashar Assad’s forces. The Shiite militant organization is backed by Iran.

The same group previously claimed responsibility for an attack on the Iranian embassy in Beirut.

Tens of thousands of Hezbollah fighters have been fighting alongside Syrian President Bashar al-Assad’s troops against the mostly Sunni-led rebels.

Speaker Berri is closely associated with Hezbollah, the Syrian regime and Iran