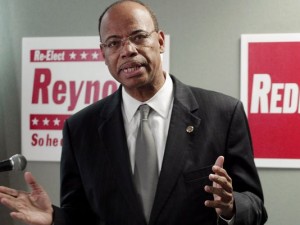 Former U.S. Rep. Melvin Jay Reynolds has been arrested in Zimbabwe on suspicion of possessing pornography and an immigration offence.

Reynolds is being held in custody and is expected to appear in court soon, immigration official Ario Mabika told The Associated Press.

Reynolds, 62, was arrested Monday by police detectives and immigration officials at a Harare hotel, according to the state-controlled newspaper, The Herald.

He brought several Zimbabwean models and other women to his hotel room where he took photographs and videos, the newspaper reported.

As Reynolds was being escorted to a government vehicle he demanded that officials give him his mobile phone and laptop computer, according to The Herald, whose reporter arrived at the hotel as the arrest was taking place.

Reynolds complained that he was not expecting such treatment when he had brought investors to the country, according to the newspaper. He said he had been to Zimbabwe 17 times and had called for U.S. sanctions to be dropped against President Robert Mugabe and his top associates.

This is the latest of several legal problems for Reynolds, an Illinois Democrat, who once was a Rhodes scholar. Reynolds resigned from his congressional seat in 1995 after he was convicted of 12 counts of statutory rape, obstruction of justice and solicitation of child pornography. While in prison he was also convicted of bank and campaign fraud. He was in jail until his sentence was commuted by President Bill Clinton in Jan. 2001.

Regarding Reynolds’ new arrest in Zimbabwe, a spokeswoman for the U.S. Embassy, Karen Kelley, said the embassy could not comment as it was a private matter and the embassy did not did not have a privacy waiver.

Reynolds also has accumulated hotel bills worth $24,500 which he has not yet paid, reported The Herald.

Reynolds could face up to two years’ imprisonment or a hefty fine if found guilty of possessing pornographic material and deportation for breaching Zimbabwean immigration laws. It is illegal in Zimbabwe to possess any material of a sexual nature.

Before his arrest, Reynolds had gained prominence in Zimbabwe for being involved in attracting investment for the $145 million construction of a Hilton Hotel and office complex in Harare, reported The Herald. Construction is expected to begin in April and be finished in last 2016, said the newspaper.

“He toured the construction site back then in the company of government ministers Walter Mzembi, Webster Shamu and Ignatius Chombo, and businessman Mr Farai Jere,” according to the paper.

At one time Reynolds was considered a rising star in the Democratic party.

A Harvard graduate, Reynolds unseated U.S. Rep. Gus Savage in 1992, two years after a House ethics committee determined that during an official trip to Africa Savage had made improper sexual advances to a female Peace Corps volunteer.

But then Reynolds was convicted in his own sex case and sent to prison in 1995. Later, while still behind bars, he was convicted of fraud for concealing debts to obtain bank loans and diverting money intended for voter registration drives into his election campaign. In 2001, President Bill Clinton commuted the sentence for bank fraud and Reynolds served his remaining time in a halfway house.

Reynolds’s arrest comes a little more than 14 months after he tried to resurrect his political career, running for the congressional seat vacated by Jesse Jackson Jr., who resigned from office and pleaded guilty to misusing campaign funds on personal items. Jackson is now serving a 2 1/2 year prison term.

Reynolds was never really considered a serious candidate and that run ended in defeat, as did a 2004 run when in the Democratic primary he received just 6 percent of the vote.

Announcing his run in late 2012 Reynolds, who said he had his own consulting firm and some business in Africa, campaigned with posters that proclaimed “Redemption.”