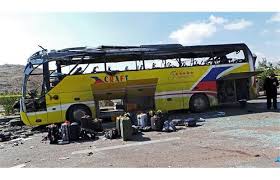 Egyptian security officials say a suicide bomber was behind the deadly blast that tore through a bus carrying South Korean tourists.

They say the bomber boarded the bus while it waited near the Egypt-Israel border crossing at Taba in the Sinai Peninsula. The Egyptian driver and the South Korean guide had disembarked but were close to the bus when Sunday’s blast took place, according to the officials.

South Korean officials say the bombing killed three South Koreans and an Egyptian driver. The tourists were Korean Christians who had saved for years to visit Biblical sites on their church’s 60th anniversary.