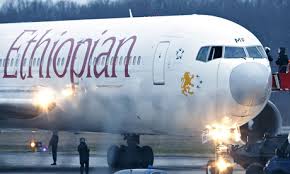 A co-pilot on an Ethiopian Airlines flight bound for Rome hijacked the airliner early Monday morning and flew it to Geneva, Switzerland, looking for asylum.

The man, an Ethiopian in his early 30s, was arrested when the plane landed at Geneva International Airport, police said. The 202 passengers and crew aboard the Boeing 767-300 were not harmed.

It was a welcome outcome from the last time an Ethiopian Airlines was hijacked.

In 1996, 125 people died after a hijacked Ethiopian Airlines crashed in the Indian Ocean after running out of fuel. In that case, the hijackers were seeking asylum in Australia.

In Monday’s incident, Flight 702 had taken off from the Ethiopian capital of Addis Ababa and was headed to Rome, the airline said.

The co-pilot took control of the plane when the pilot went to the restroom, said Swiss police spokesman Jean-Philippe Brandt.

The co-pilot, who was not named, closed the fortified door, police said. Instead of Rome, he then steered the plane toward Geneva.

At one point, as the plane hovered over Geneva’s airspace several times, he asked the control tower:

“And you have to give us lastly permission on board for asylum.”

“Yes I know,” the tower responded. “Sorry, but we are still waiting for the response. We are trying our best to get you the response, sir.”

“I will be coming out via the window,” the co-pilot told the control tower.

He then escaped through the cockpit window using a rope, and surrendered to police, Brandt said.

He was unarmed, authorities said.

“His act has been motivated by the fact that he feels threatened in his county and wants to make an asylum claim in Switzerland,” Swiss police spokesman Philippe Grangean said.

The passengers were not threatened or put in danger, police said.

Ethiopian Airlines, in a statement, would only say the plane was “forced to proceed” to the airport.

During the incident, Geneva International Airport was shut down. It reopened later Monday morning.

While rare, a pilot hijacking an airline is not unheard of.

In 1998, an Air China captain, reportedly disgruntled with life in China, hijacked his passenger jet to Taiwan.