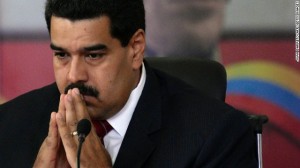 Venezuelan President Nicolas Maduro on Sunday ordered three U.S. diplomatic officials expelled from the country, accusing them of conspiring against his government.

The announcement comes after the U.S. State Department expressed concerns about the state of affairs in Venezuela.

Three anti-government protesters died in clashes last week in Caracas, and authorities have issued an arrest warrant for an opposition leader on charges including conspiracy and murder in connection with the violence.

“We are deeply concerned by rising tensions, by the violence surrounding this February 12 protest and by the issuing of a warrant for the arrest of the opposition leader Leopoldo Lopez,” State Department spokeswoman Marie Harf said Saturday.

“We join the secretary general of (the Organization of American States) in condemning the violence and calling on authorities to investigate and bring to justice those responsible for the death of peaceful protesters.”

But the Venezuelan Foreign Ministry fired back at the Obama administration.

“The U.S. government is lying when the denounced the arrest of anti- peaceful protesters,” the ministry said in a statement. “The world must know that there is sufficient evidence that the groups that have caused violence in recent days are headed by Mr. Leopoldo López.”

Lopez’s party, Popular Will, has accused the government of being responsible for violence during the protests.

In a YouTube video posted from an undisclosed location over the weekend, Lopez called for new anti-government protests Tuesday and vowed to show his face in front of Venezuela’s Justice Ministry and hand over a list of demands from the Venezuelan people to government officials.

“It has been said in recent days that they want to see me held prisoner. I will be there to show my face. I have nothing to be afraid of. I have not committed any crime. I have been a Venezuelan committed to our country, to our people, to our constitution and to our future,” he said. “If there is some decision to illegally imprison me, well, I will be there, to assume this persecution and this infamous decision by the state.”

He encouraged protesters to be peaceful and to allow him to walk the final stretch to the ministry alone.