Bahrain accuses Iran of interference in its internal affairs 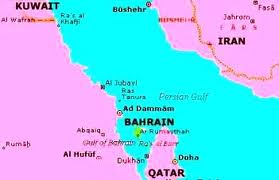 Afkham said, “Such remarks indicate the frustration of the Bahraini officials in dealing with the legitimate demands of the oppressed people of Bahrain.”

This development comes after Bahrain’s foreign minister urged Iranians to show fortitude and resilience as they endure injustice, starvation and lack of rights.

“[Ali] Khamenei calls on the people of Bahrain to be steadfast and describes them as strong…Thank you very much. We will remain steadfast in your face until God decrees His command,” Shaikh Khalid Bin Ahmad Al Khalifa posted on his Twitter account.

“I urge the people of Iran to show resilience and fortitude as they resist injustice, deprivation of rights, starvation and the squandering of their funds on terrorists everywhere,” Shaikh Khalid, who has 159,000 followers, said in another tweet.

The Bahraini minister was reacting to a statement attributed to Iran’s leader Ali Khamenei in which he said that “Bahrainis have proven they were strong because they were able to resist even though everybody was against them.”

According to reports, Khamenei made the remarks as he received Bahraini citizens in Iran. Commenting on Khamenei’s remarks, Nabeel Al Hamar, the King’s media advisor, said that they were “a blatant interference in Bahrain’s domestic affairs”.

“Khamenei claims that the issue of Bahrain can be solved only through patience and fortitude,” he posted on his account. “We tell him that the only issue we have in Bahrain is the Iranian interference in our internal affairs.”

“Khamenei claims that the issue of Bahrain can be solved only through patience and fortitude,” he posted on his account. “We tell him that the only issue we have in Bahrain is the Iranian interference in our internal affairs.” Nabeel Al Hamar, the Bahraini King’s media advisor said

Relations between Manama and Tehran have traditionally gone through tense periods, mainly due to sporadic claims by Iranian hardliners that Bahrain was an Iranian province. However, they plummeted to their lowest levels in 2011 amid the dramatic events that occurred in Bahrain in February and March.

Both capitals then recalled their ambassadors “for consultations”, and while Manama reinstated its top diplomat in Iran, Tehran has kept its embassy in Bahrain open, but without a chief of mission.