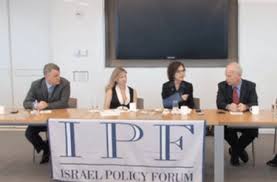 On Wednesday the Israel Policy Forum delivered a letter to Israeli Prime Minister Benjamin Netanyahu on behalf of 150 prominent American Jewish leaders. They wrote to urge him to continue talks in pursuit of a two-state solution in Israel and Palestine, and expressed support for his efforts thus far.

The letter said in full:

As American advocates for a strong, Jewish and democratic Israel, we have been heartened by Secretary of State John Kerry’s extraordinary resolve to advance this process consistent with America’s unwavering commitment to Israel’s security. We believe Secretary Kerry’s determined diplomatic effort offers an unprecedented opportunity to ensure Israel’s security, to enhance its prosperity, and to avoid the existential threat to the Jewish state posed by bi-nationalism.

It is our hope that President Mahmoud Abbas will join you in demonstrating leadership to advance these talks. By moving forward at this time, we believe that the Palestinian leadership will be challenged to make important compromises, to end incitement and to demonstrate a genuine preparedness to live in peace alongside the nation-state of the Jewish people.

Mr. Prime Minister, at this pivotal moment of decision-making, we offer our support and encouragement as you move forward to pursue a lasting agreement that will protect Israel’s security as a homeland for the Jewish people.