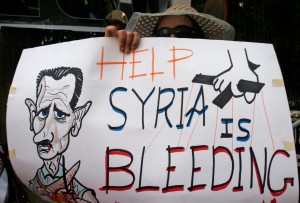 Syria peace talks headed into a third day on Wednesday after sparking warnings of failure, but the evacuation of civilians from besieged rebel-held areas of the city of Homs was set to resume.

Little progress towards breaking the deadlock was apparent Tuesday, despite appeals from UN-Arab League mediator Lakhdar Brahimi to end the “nightmare” of the Syrian people.

The veteran peacemaker was downbeat after a three-hour session in Geneva Tuesday marking the first face-to-face talks between Syria’s rival camps this month.

“The beginning of this week is as laborious as it was the first week,” Brahimi told reporters. “We are not making much progress.”

The current round of talks is set to last until Friday.

But it got off to a shaky start on Monday, and Tuesday’s session did not appear to achieve anything beyond a restating of well-known positions.

“I think Geneva under the current circumstances will end in failure,” Ali Haidar, Syria’s reconciliation minister, told AFP in Damascus.

Opposition spokesman Louay Safi said his side would not “run away”, but that without progress it would be “more honest to say we have failed”.

A first round was held in Geneva from January 24-31, when simply getting the foes to the table for the first time since the war erupted in 2011 was deemed a breakthrough.

But neither side has budged.

The opposition says the only way to end the conflict is to form a transitional government — without President Bashar al-Assad.

The regime insists Assad’s future is non-negotiable and that the talks must focus on halting “terrorism” — its term for a revolt it says is fuelled by foreign jihadists and Gulf money.

In Geneva, key Assad aide Buthaina Shaaban blasted the opposition for refusing to “acknowledge that there is terrorism in Syria”.

“The only thing they want to discuss is the transitional government,” she told AFP.

The opposition, which notes that the mainstream Free Syrian Army rebels are themselves fighting the jihadists, rejects the broadbrush terror label applied by the regime.

It wants discussions to address regime actions such as starving out opposition-held areas and raining explosives-packed “barrel bombs” from helicopters.

“The secretary-general… calls for the perpetrators of this massacre, and all other crimes in Syria, to be brought to justice,” said a statement released by Ban’s spokesman.

The London-based Syrian Observatory for Human Rights said at least 25 members of Assad’s Alawite sect were killed by Islamist fighters in Maan, in Hama province.

The group said most of the dead were pro-regime militiamen, but state television reported a “massacre” of 10 women.

The war, which began after a regime crackdown on Arab Spring-inspired protests in March 2011, has now claimed more than 136,000 lives, sent millions fleeing their homes, sparked a humanitarian catastrophe and put massive strain on refugee-hosting neighbours Turkey, Lebanon, Jordan and Iraq.

Brahimi said the talks must focus on the need to “help Syria out of the nightmare its people have been living through”.

An agreement on evacuating civilians from Homs — a hub of the revolt against Assad, which has been besieged for some 600 days — was the only tangible result of January’s talks.

But the operation started only last week amid blame-trading for delays and violations of a UN-brokered truce in the city.

Operations began on Friday to evacuate those among the estimated 3,000 civilians trapped in the Old City of Homs who wish to leave and deliver aid to those who want to stay.

The United Nations said Tuesday that a total of 1,132 people had been evacuated.

But operations were suspended later Tuesday, with local authorities citing “logistical and technical reasons”. The delay was only for a day, they said.

Melissa Fleming, spokeswoman for the UN refugee agency, said that 336 male evacuees had been taken in for questioning.

Afterward, aid workers were able to speak to the men, who said they wanted to be allowed to join the women and children already evacuated.

The regime has said men must be interrogated in order to weed out “terrorists”, but the opposition raised fears that separating men from women and children could be a tactic to detain them.

While hailing the Homs operation, conducted at high risk by aid workers, Brahimi said it was only a small step and “nothing has happened” in a host of other besieged communities.

In New York, diplomats said the ambassadors of the 15 UN Security Council members held informal talks on a draft humanitarian resolution sponsored by Western and Arab countries but opposed by Russia.

French Ambassador Gerard Araud said experts would now pursue discussions on the draft which calls for greater humanitarian access in Syria and the immediate lifting of sieges to several cities, including Homs.