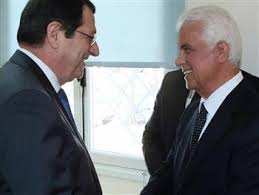 Cyprus’ rival communities have embarked on a new round of talks to achieve the long-elusive goal of reunifying the ethnically-split island nation.

Greek Cypriot president Nicos Anastasiades and the leader of the breakaway Turkish Cypriots, Dervis Eroglu, met inside the United Nations-controlled buffer zone that slices through the capital Nicosia, to herald the restart of talks after a 20-month stalemate.

Cyprus was split in 1974 when Turkey invaded after a coup aiming for union with Greece. Only the internationally-recognised, Greek Cypriot-dominated south enjoys the benefits of the island’s 2004 European Union entry.

Talks resumed after the two leaders agreed on a document outlining key provisions of an envisaged federation.

It is a different approach from previous negotiations, one that Mr Anastasiades insisted was necessary to prevent talks from dragging on without results, like so many earlier rounds over the last 40 years.

“Today’s joint statement outlines the basic principles for a solution… (it) is not the final accord but the beginning of an arduous effort in order to reach the desired goals,” Mr Anastasiades said.

UN secretary general Ban Ki-moon and the UN Security Council welcomed the joint communique and the relaunch of negotiations.

The council expressed hope “that the leaders will take advantage of this opportunity to reach a comprehensive settlement” and said it “looks forward to substantive progress in the negotiations as soon as possible”. It underlined “the benefits that reunification will bring to the island”.

Mr Ban said the United Nations would continue to support Greek and Turkish Cypriots “in their efforts to reunify the island and move on from decades of separation”.

The White House hailed the leaders’ “courage and vision” on forging the declaration and echoed EU chiefs who said it laid “a solid foundation” for achieving peace.

Bailed-out Cyprus would stand to benefit from a peace agreement. and the allure of new-found offshore gas deposits could also spur talks.

But Mr Anastasiades faces strong domestic pressure from critics who say the document contains the seeds of possible Turkish Cypriot statehood, which could unravel any peace accord.