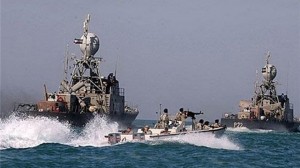 The two Iranian warships headed toward U.S. waters — one of which barely survived a 1988 run-in with an American fighter jet — are a pair of “rust buckets” Tehran is using to prove to its people it can project power around the globe, naval experts said.

The commander of Iran’s Northern Navy Fleet said the ships — the frigate Sabalan and Kharg, a supply ship capable of carrying helicopters — began their trip last month from the southern port city Bandar Abbas. Adm. Afshin Rezayee Haddad said the vessels had already entered the Atlantic Ocean near South Africa en route to U.S. maritime borders as part of a three-month mission. Haddad characterized the move as a response to the ongoing presence of the U.S. Navy’s 5th fleet, which is based in Bahrain, across the Persian Gulf.

But the British-built ships, which are reportedly carrying roughly 30 Iranian Navy academy cadets, are not militarily imposing, according to defense experts reached by FoxNews.com.

“From a tactical perspective, neither one of these ships are any good; they are an afterthought to the U.S. Navy from a warfare perspective,” said Christopher Harmer, senior naval analyst at the Institute for the Study of War. “From a strategic standpoint, they are very important.”

In 1988, the 310-foot Sabalan was attacked by American forces after it fired upon an A-6 Intruder aboard the USS Enterprise following tensions in the Persian Gulf. The Iranian ship was completely decimated but did not sink, ultimately being restored and improved — something not lost on the Iranian powers, Harmer said.

“They are very aware that we nearly sunk the Sabalan, and there’s absolutely a psychological message being sent here by the Iranian Navy,” he said. “Up until five years ago, everything the Iranians were doing was focused on short-range defense with their navy, including small-missile ships that were optimized for shallow waters in the Persian Gulf.”

The larger of the two ships, the 679-foot Kharg, can support three helicopters, but poses no real threat. One analyst, Michael Eisenstadt of The Washington Institute, characterized the aging vessels as “rust buckets” with little heft on international waters. Another expert questioned how much of the naval war games really convinces the average Iranian.

“What happens day after day in the Iranian press is there’s a constant theme that Iran is capable of defending itself and that the United States cannot attack or invade it,” said Anthony Cordesman of the Center for Strategic and International Studies. “A lot of that deals with the ability to deal preventive strikes.”

“I’m skeptical,” said Harmer, adding that the Iranians have previously expressed similar global naval aspirations. “But we’ll respond in the sense that we’ll keep an eye on them.”

Above all, the move should be seen as a direct message to Iranians, not the U.S. Navy or the citizens it protects, according to U.S. Army (Ret.) Lt. Col. David Johnson, now serving as executive director at the Center for Advanced Defense Studies.

“This would be aspirational and demonstrate that they have the capability to reach out to us and hopefully threaten us the way we threaten them on a daily basis,” Johnson told FoxNews.com. “I believe the target audience is internal — not us. They are demonstrating to [Iranians] and others in the region that they can stand up to the big boy.”

If the ships make it across the ocean to U.S. maritime waters, they wouldn’t even be a match for Coast Guard cutters, Johnson said.

“The point would be that the world is a much smaller place,” Johnson said, perhaps leading to expanded political pressure stateside to increase American presence in the region. “It’s a message to their population that we’re a conventional power.”

But the ships — and their capabilities — paint a different picture, according to Cordesman, who said they’re conventionally armed with the equivalent of little more than “terror weapons,” or less operational than a 2,000-pound bomb.

“We would get concerned if there was any kind of air-sea capability or missile launch capacity, or if Iran had the kind of surface or submarine fleet that could reach across the Atlantic,” Cordesman said. “At this point in time, Iran cannot pose a single meaningful naval threat outside the Persian Gulf and the Gulf of Oman.”

It isn’t the first time Iran tried to use its modest navy to threaten the U.S. In 2011, Iran warned it might deploy warships close to the U.S. coast. The official IRNA news agency then quoted Iranian naval chief Rear Adm. Habibollah Sayyari saying, “Like the arrogant powers that are present near our marine borders, we will also have a powerful presence close to American marine borders.”