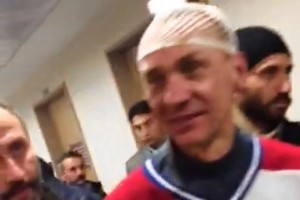 Investigators say the Ukrainian man who tried to hijack a Turkey-bound commercial flight and divert it to Sochi – the Russian city currently hosting the Winter Olympics – was pushing for the release of prisoners in his country.

Maxim Lenko of the Ukrainian Security Service’s investigative division said Saturday the would-be hijacker threatened to blow up the plane if his demands were not fulfilled.

“A passenger on this plane, about an hour after the plane took off, broke into the cockpit demanding the plane change its course to Sochi, where he said [President] Yanukovych and [President] Putin are, their hands covered in blood. And he demanded, quote, ‘to free all prisoners in Ukraine.'”

The plane was carrying 110 passengers to Istanbul from the Ukrainian city of Kharkov when the attempted hijacking took place.

Lenko said the crew managed to calm the suspect and restrain him, and the plane landed safely in Istanbul after being escorted by two Turkish air force planes. No explosives or weapons were found on board.

Authorities are quoted as saying the suspect was extremely drunk at the time of the incident.

Ukrainian President Viktor Yanukovych was holding crisis talks in Sochi Friday with Russian President Vladimir Putin on the sidelines of the Olympic Games’ opening ceremony. Ukraine has faced more than two months of anti-government protests that have seen hundreds arrested and others injured or killed.

Authorities worldwide have been on high alert for terrorist threats linked to the Olympics, with much of the concern focused on Islamic militants in Russia’s North Caucasus region.