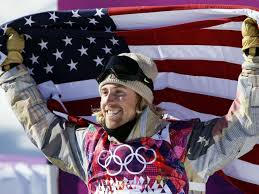 With his long blonde hair sprouting out of a tan knit cap, Sage Kotsenburg took a deep breath, not fully prepared for what was coming next. Out of the best snowboarders in the world, they were about to announce the most unlikely of gold medal recipients.

Kotsenburg, his laid-back lingo native to the slopes, later said he was “stoked” after such a “sick” men’s slopestyle competition. But even after his name was announced, the affable 20-year old from Park City, Utah, stood shocked on the Olympic podium, wearing a frozen, immovable smile. He’d won the first gold medal of these Olympics and the first ever rewarded in the slopestyle event.

How unlikely was Kotsenburg’s gold medal win? Well, consider this: He won a Grand Prix event three weeks ago in Mammoth Lakes, Calif. Before that, he was stuck in a “mega drought” and by his own recollection hadn’t won a snowboard competition since he was 11.

“Coming here and winning, I can’t even describe the feeling,” he said. “It’s so cool.”

The slopestyle event — a steep snowboard course featuring long rails and big jumps — debuted at these Sochi Olympics and made headlines earlier in the week when American Shaun White, the most famous athlete the sport has known, dropped out of the competition. By comparison, Kotsenburg was among the least-known participants.

A total of 20 riders hit the mountain Saturday morning, competing for one of four remaining spots in the afternoon finals. Kotsenburg posted the second-highest mark and was the only American to advance. “Whoa how random is this I made finals at the Olympics!!!” he tweeted to his supporters.

He figured he had nothing to lose in the finals. He called his brother and said he was considering the unthinkable: throwing a trick on the biggest stage imaginable that he’d never before attempted. It’s called a 1620 Japan — imagine 4½ rotations with a behind-the-back board grab — and he nailed it, capping off a stylish run where an array of board grabs impressed more than any big eye-popping jumps.

“I had no idea I was even going to do a 1620 in my run until, like, three minutes before I dropped,” he said. “That’s kind of what I’m all about, just kind of being random.”

Kotsenburg had no clue how the judges would receive it. Since Thursday’s qualification round, snowboarders had been scratching their heads, trying to decipher the Olympic scoring. Kotsenburg was among the most vocal riders earlier in the week, saying judges were encouraging “robotic” jumps and not rewarding creativity.

“A lot of people in snowboarding spoke out about what they thought about the judging. Maybe they saw it,” he said. “When you have a whole community of snowboarders thinking the judging is off, you got to take something into consideration, like, ‘Hey, maybe we should be rewarding this more.’”

Impressed by Saturday’s run in the finals, the judges gave Kotsenburg a score of 93.5 — “Pretty sick to see that some weird, creative stuff got rewarded,” he’d say later — and then the American rider had to hold his breath as he watched the rest of the field try to top his mark. One by one they came down, flipping, spinning and in some cases, falling. With such a high score to beat, many had to go big and it cost them.

Even those who stayed on their feet didn’t always get the scores they wanted. Mark McMorris impressively landed two triple corks — Kotsenburg didn’t even attempt one — but the Canadian rider finished the competition in third place with a score of 88.75.

“We’re not really knowing what’s going on with the judges,” said Canadian rider Maxence Parrot, the fifth-place finisher. “We don’t know how they score us, we don’t know what they’re looking for on the slope. That, I think, is the thing we should get in other contests: to know what judges want to see in the jumps.”

McMorris, a gold-medal favorite who was competing with a broken rib, didn’t hide his disappointment with the scoring in the early rounds, but he refrained from being too critical after his bronze-winning run Saturday.

“Just to ride the way I want to ride is the most important thing,” McMorris said. “The rest is up to the judges, and I’m happy with everything, the outcome. A lot of people think it should have been different, but I’m going to still smile and represent Canada the best I can.”

Kotsenburg’s score held up. Norway’s Staale Sandbech took silver with a 91.75, and the judges seemed to make a statement Saturday. Style and creativity mean something, and few Olympic riders showed more personality on and off the board than Kotsenburg.

He was mugging for cameras and waving to the crowd. On the podium, when he heard his name called, he hugged his competitors and invited them to join him on the top step.

On the biggest stage, Kotsenburg went for broke, not letting expectations, his own modest history or anything else dictate his run.

“That’s what snowboarding is all about. It’s based off doing what you want to do,” Kotsenburg said. “There’s no blueprint to snowboarding. You can really make your own mark and put your own flair on tricks.”