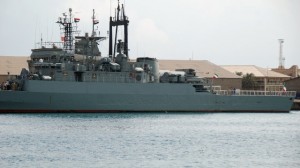 A senior Iranian naval official says Iran is sending warships toward U.S. maritime borders to send a message, a move a U.S. defense official characterized as an announcement, not a deployment.

The plan, according to Fars, is a response to the United States beefing up its naval presence in the Persian Gulf. The U.S. 5th Fleet is based in Bahrain.

Haddad said the Iranian fleet was under way and approaching the Atlantic Ocean “via the waters near South Africa,” a claim that has not been confirmed.

It’s not the first time Iran has made such a threat, said the U.S. defense official, speaking on condition of anonymity.

“It’s important to understand that, at this point, we have an announcement not a deployment. They’ve stated this aspiration before,” said the defense official, speaking on condition of anonymity because of the sensitivity of the matter.

In 2011, Iran twice announced plans to send ships toward the U.S. maritime borders.

“Freedom of the seas doesn’t just apply to fish. It applies to all maritime nations, all navies, everywhere — so long as they understand the responsibilities which come with that freedom,” the defense official said.

“So if they chose to send their ships to the Atlantic, I’m sure they won’t be surprised to find many, many others already there.”

The Iranian navy is the smallest of its military forces, according to GlobalSecurity.org, which tracks defense and intelligence issues.