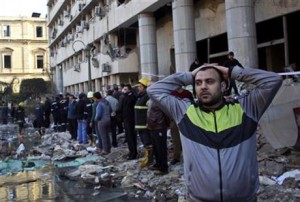 Centuries-old glass and porcelain pieces were smashed to powder, a priceless wooden prayer niche was destroyed and manuscripts were soaked by water spewing from broken pipes when a car bombing wreaked havoc on Cairo’s renowned Islamic Art Museum.

Experts scrambled to try to save thousands of priceless treasures as ceilings crumbled in the 19th-century building, which had just undergone a multi-million-dollar renovation.

The explosions, which targeted police and the main security headquarters, shook the museum located in the nearby old Cairo district of Bab el-Khalq, propelling steal and ceiling plaster onto its glass cases and wooden artifacts.

“The museum was totally destroyed and needs to be rebuilt,” Egypt’s Minister of Antiquities Mohammed Ibrahim said.

“I am in a shock and speechless. Imagine if an attack struck the Metropolitan, what would happen? This museum is just like the Metropolitan in its significance,” said former museum official Mohammed el-Kilani.

Built in 1881, the Cairo Museum of Islamic Art is home to the world’s richest collection of artifacts from all periods of Islamic history. It houses nearly 100,000 pieces representing different Islamic eras, 4,000 of them on display and the rest in storage.

According to its official website, the museum houses works from the 7th-century pre-Islamic era to the end of the 19th century, including carpets, coins, ceramics, jewelry, manuscripts, marble carvings and wood work. A water fountain made of colored mosaic is among the most impressive pieces on display and dates back to the 13th-16th century Mamluk era.

A recently completed $14.4 million renovation included 25 exhibition halls, as well as state-of-the-art security and lighting systems, a fully-equipped restoration laboratory, a children’s museum and a library, much of which was gutted by the blast.


Ceramic and Gypsum pieces dating to the Fatimid and Mamluk periods suffered the most damage, along with ancient lanterns once used in mosques during the holy month of Ramadan. Of the world’s 300 rare lanterns, the museum houses 60, and five of those were ruined, said Rafaat el-Nabarawy, an Islamic antiquities professor.

“This is a very sad day for antiquities,” el-Nabrawy said. “These are rare and irreplaceable.”

Among other destroyed treasures, he said, were glass pieces dating back to 750, including an ornate pot of a rare type of glass believed to be pioneered by the early Egyptians.

Other priceless pieces that were damaged or destroyed included a century-old wooden niche or “mihrab” used in mosques to point to the direction of Mecca during the five daily calls to prayer. Arabic inscriptions and verses from the Quran were carved on the piece, which belonged to Ruqaya, a daughter of Ali, a successor of Prophet Muhammed.

Estimates of the damage varied, with former museum official el-Kilani and other archaeologists saying nearly all of the collection was lost, while other experts said 5 percent to 20 percent of the museum’s pieces were destroyed.

El-Nabrawy estimated that about 5 percent of the museum’s artifacts were lost because many of the textiles, coins and metal artifacts could be salvaged.

“Even if it is only one piece, this is history and heritage that is priceless,” he said.

The director-general of UNESCO, Irina Bokova, agreed and pledged to help in restoration efforts. “This raises the danger of irreversible damage to the history and identity of the Egyptian people,” she said of the attack on the museum and its collection.

Abdel-Moaz Abdel-Salam, a resident of Bab el-Khalq, walked past the museum and screamed in anger: “Look at this. The history of the country! Look what happened to it.”

“This is the history of Egypt. They are distorting it. We can easily rebuild the security headquarters. How can I rebuild this?”

Top Photo: A truck bomb blasted the main security headquarters in Cairo on Friday, one of a string of four bombings hitting police in the Egyptian capital within a 10-hour period, killing six people. The attack fueled a furious backlash against the Muslim Brotherhood. In the hours after the blast, angry residents — some chanting for the “execution” of Brotherhood members — joined police in clashes with the group’s supporters .