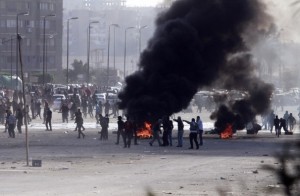 The U.S. is strongly condemning a string of bombings in Egypt’s capital that killed at least six people on Friday.

The White House says President Barack Obama has been briefed on the Cairo bombings and violent clashes in cities across Egypt that left another 10 people dead.

Obama spokesman Jay Carney urged all sides to condemn and prevent violence. Carney says such behavior will stunt Egypt’s political transition and only hurt the country’s prospects for political and economic stability.

Friday’s attacks fueled fears of an increasing militant insurgency in retaliation for the military’s ouster last year of Islamist President Mohammed Morsi and the subsequent crackdown on his Muslim Brotherhood and other Islamists. Hours after the bombings, angry residents joined security forces in clashes with Brotherhood supporters.