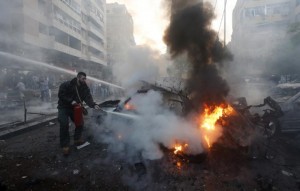 An Islamist terrorist group suspected of links to al-Qaida declared Friday that all the areas in Lebanon where the Iranian backed Shiite Hezbollah militant group operates are “legitimate targets” for attack and warned the Sunnis to avoid them.

“We, al-Nusra Front in Lebanon, announce that Iran’s party (Hezbollah) and all its bases and strongholds are legitimate targets for us, wherever they are,” the group said in a statement which was posted on the Internet.

The statement comes three days after the group , which is is reportedly part of the Syrian al-Nusra Front claimed responsibility for a suicide car bomb attack that killed four people in the Beirut southern suburb of Haret Hreik , a Hezbollah stronghold.
Tuesday’s was the sixth in a string of attacks targeting Hezbollah strongholds in Lebanon since the Lebanese group acknowledged sending members into neighboring Syria to fight alongside President Bashar Assad’s regime against the mostly Syrian rebels .

One observer told Ya Libnan: ” Al Nusra was never active in Lebanon before Hezbollah went to Syria. The first time Al Nusra was mentioned in Lebanon when former PM Rafik Hariri was killed and former security chief Jamil Sayyed pressured TV media to air the Al-Nusra ‘s Abou Addas fake claim of responsibility for the assassination.” he added ” Al Nusra’s , and Al Qaeda’s name surfaced again in 2012 when former Lebanese minister Michel Samaha was sent by President Bashar Assad to plant bombs to create sectarian strife all over Lebanon and then have Al Qaeda claim responsibility.”

Photo: Explosion in the beirut suburb of Haret Hreik in January 2014 for which al-Qaida linked Islamist group claimed responsibility .