Pope Francis calls the Internet a ‘gift from God 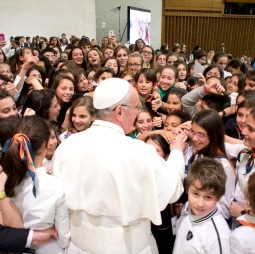 It may sometimes be a breeding ground for pornographers, bullies and hateful extremists, but the Internet received an official blessing Thursday from Pope Francis, who called it a “gift from God.”
“The digital world can be an environment rich in humanity, a network not of wires but of people,” said Francis, adding: “The Internet, in particular, offers immense possibilities for encounter and solidarity. This is something truly good, a gift from God.”

However, in a speech marking the Roman Catholic Church’s World Communications Day, the pope warned the Internet also had the power to “isolate” people from their neighbors.

The Vatican has entered the world of social media with gusto, launching a Facebook page and an online news portal that can be downloaded as an app. The papal Twitter account, begun by Francis’ predecessor, Benedict XVI, now boasts more than 3.5 million followers.

Last year, the Vatican even offered indulgences — which cut time from the period Catholics believe they will spend in purgatory after they have confessed and been absolved of their sins — to those who followed the Catholic World Youth Day in Rio de Janeiro via Twitter.

But on Thursday, Francis warned the Internet was also fraught with dangers.

“The speed with which information is communicated exceeds our capacity for reflection and judgment, and this does not make for more balanced and proper forms of self-expression,” he said. Too much time spent surfing the web, he added, “can help us either to expand our knowledge or to lose our bearings.”

The desire to be online, he said, “can have the effect of isolating us from our neighbors, from those closest to us.”

The solution is to slow down. “We need, for example, to recover a certain sense of deliberateness and calm,” Francis said. “This calls for time and the ability to be silent and to listen.”

Draining some of the venom and hostility that can be found on the web would also help bring about real understanding of the world, he said. “If we are genuinely attentive in listening to others, we will learn to look at the world with different eyes and come to appreciate the richness of human experience as manifested in different cultures and traditions.”

He also called the Internet a good place to talk about God.
“As I have frequently observed, if a choice has to be made between a bruised church which goes out to the streets and a church suffering from self-absorption, I certainly prefer the first,” he said. The “digital highway” is just another “street teeming with people who are often hurting, men and women looking for salvation or hope.”