Kerry: Syria’s Assad not ready to give up yet 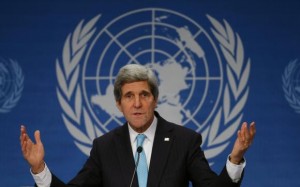 Syria’s President Bashar al-Assad is not ready to step down yet, U.S. Secretary of State John Kerry said on Thursday, a day after Syria’s government and opposition met to launch peace talks during an international conference in Switzerland.

“Obviously he is not ready at this point in time,” Kerry said in an interview with Al-Arabiya on the sidelines of the World Economic Forum meeting in Davos adding: “This is a man who has committed war crimes.”

Kerry said if a peace agreement is reached, many countries had offered to send peacekeepers to Syria.

“If there is a peace agreement, there are many countries that have already offered to step up and be peacekeepers in the new Syria,” Kerry said. “There is no question but that we are all prepared to help provide protection to any of the minorities.”

Kerry’s remarks come a day after saying during the opening of a peace conference in Switzerland that the Syrian leader could have no role in any future transitional government after three years of war.

Expectations are low for a breakthrough at the talks, dubbed Geneva II, which bring the opposition and the regime together for the first time since an uprising began in March 2011.

But as the UN works on trying to get both sides around the negotiating table on Friday, the United States has called for agreement on local ceasefires and improved aid access to reach stricken communities.

But he stressed to Al-Arabiya that there would not be any American boots on the ground.

While he did not name any countries, he said they would be countries acceptable to Syria.