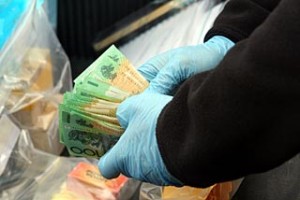 Australian police revealed Thursday they had cracked a major global money-laundering ring with operatives in more than 20 countries and funds syphoned off to groups reported to include Hezbollah.

The Australian Crime Commission said more than A$580 million (US$512 million) of drugs and assets had been seized, including A$26 million in cash, in a year-long sting codenamed Eligo targeting the offshore laundering of funds generated by outlaw motorcycle gangs, people-smugglers and others.

According to the ACC, the operation had disrupted 18 serious and organised crime groups and singled out 128 individuals of interest in more than 20 countries, tapping information from agencies including the United States Drug Enforcement Administration.

“The task force focused on high-threat money laundering activities and, as a result, revealed a range of different crime types which has led to these extraordinary outcomes,” said Australia’s Justice Minister Michael Keenan.

“Seizing more than $550 million worth of drugs and cash is a significant blow to the criminal economy,” he added.

Legitimate international cash wiring services were a major focus of the operation, with the government’s anti-laundering agency AUSTRAC saying they had been identified as at “high risk of being exploited by serious and organised crime groups”.

According to a Fairfax media expose on the operation, criminals targeted foreign nationals and students in Australia awaiting remittances from overseas, hijacking the transaction by depositing dirty money to the payee and then taking the cash wired from offshore.

Fairfax said at least one of the exchange houses used in the Middle East and Asia delivered a cut from every dollar it laundered to Lebanon’s powerful Shiite movement and Syria ally Hezbollah, which is banned as a terrorist organisation in Australia.

Organised crime is estimated to cost Australia A$10-15 billion per year by the ACC, with drugs, money-laundering, fraud, firearms and high-tech cyber offences the major issues.

Profits from transnational organised crime were estimated at US$870 billion in 2009 — the latest available data — according to the ACC’s 2013 report into the sector. That represented about 1.5 per cent of global GDP at the time.