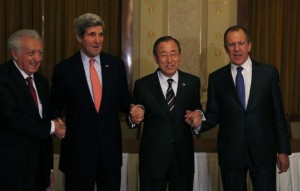 Peace talks to end the almost-three-year civil war in Syria began Wednesday on a bitter and divisive note, with the top American diplomat ruling out any possibility that President Bashar Assad could stay in power while Syria accused Arab nations of financing terrorism.

The major players at the talks in Switzerland, including the United States, the Syrian government, Russia and the Syrian opposition, expressed sharp disagreements on issues ranging from Assad’s future to Iran’s exclusion from the conference, the New York Times reports. Secretary of State John Kerry took a firm stand as the gathering opened, saying Assad could play no role in a transitional government after the brutal treatment of Syrian civilians.

Kerry’s comments came shortly after shocking accusations of systematic torture on the part of the Assad regime. The Syrian opposition leader Ahmad Assi al-Jarba also said Assad could not be part of a transition government. But Syrian Foreign Minister Walid al-Moallem accused Arab nations of funding terrorist rebel groups in Syria in a half-hour screed, as United Nations general secretary Ban Ki-Moon tried unsuccessfully to keep the delegate to speak only for the allotted seven minutes, the Times reports.

Disputes also arose over whether Iran, which supports Assad, should be included in the talks after the United Nations withdrew an invitation to the at the request of the United States. Russia’s Foreign Minister Sergey V. Lavrov argued for Iran’s inclusion, and he challenged Kerry’s insistence that Assad be excluded form a possible transitional administration.

Syrians bear the primary responsibility for ending the civil war in their country, the U.N. Secretary-General said on Wednesday, opening peace talks that he acknowledged face “formidable” challenges.

Ban Ki-moon called on the Syrian government and the Western-backed opposition trying to overthrow it to negotiate in good faith as they meet face-to-face for the first time.

“We know that it has been an extremely difficult path to reach this point. We have lost valuable time and many, many lives. Let me not mince words, the challenges before you and before all of us are formidable. But your presence here raises hope,” he said in his opening remarks.

Meanwhile, Iran’s President Hassan Rouhani says he believes there is little hope of success for the Syrian peace talks.

According to the presidential website, president.ir, Rouhani says hopes are slim because some of the countries attending the talks “are behind instability” in Syria.

Rouhani spoke in the wake of a diplomatic snub to Iran after the U.N. withdrew its invitation to Tehran to attend the talks.

Iran and its Shiite proxies the Hezbollah militant groups of Lebanon and Iraq has been Syrian President Bashar Assad’s main regional ally and a staunch supporter of his government.